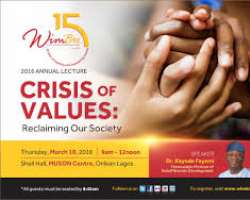 Lagos, Nigeria: The Honourable Minister of Solid Minerals Development and former Governor of Ekiti State, Dr. Kayode Fayemi would be the guest speaker at the 2016 Annual Lecture of Women in Management and Business (WIMBIZ) which will hold on March 10, 2016, at the Shell Hall, Muson Centre, Onikan, Lagos.

The lecture, themed, “The Crisis of Values: Reclaiming our Society” is expected to serve as a catalyst for national re-awakening, by stimulating discussion around the erosion of indigenous values and its effect on the society. According to Aishah Ahmad, Chairperson, Executive Council Women in Management Business & Public Service (WIMBIZ) the 2016 Annual Lecture will challenge Nigerians to reassess the definition of success and the value of money relative to social good.

“A lot of the challenges confronting us today stem from a national deterioration of values. As a result, Nigerians are sometimes viewed with distrust and suspicion around the world, despite our drive, work ethic and enterprise. It appears that the pursuit of individual gain has become the primary focus over the common good; and success increasingly measured by financial parameters, whilst we appear to be losing the traditional values of contribution and dignity in labour which made our country great in the past” Ahmad observed.

“As a group dedicated to developing human capital, we are very concerned about this and we see the 2016 Annual Lecture as our opportunity to encourage the development of a different mindset particularly among women who are natural change agents,” she said.

“Our objective is to emphasize the importance of tempering individualism with a concern for the common good. This will contribute to the restoration of fundamental values such as respect, consideration for others, living a life of integrity, service and justice will ultimately help Nigeria re-create a wholesome society.” She further disclosed.