River Basins Should be Resuscitated if Agriculture Must Thrive - Oduah, Others 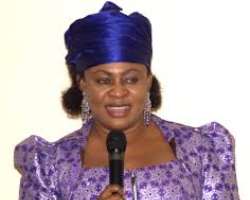 Sen. Stella Oduah (Anambra North, PDP) has called for the revival of the non functional river basins by the River Basin Development Authority to ensure a forward leap in agricultural production.

She disclosed this on Thursday, 3rd March 2016 while contributing to the motion titled: Need to Revive & Resuscitate River Basin Development Authorities (RBDAs) which she co sponsored with 16 other lawmakers.

"My major concern is that we are not harnessing our river basins, fishing deficit is about 65% not because we are not fishing enough but because storage is a huge challenge.

"For us to create employment we must think about how to resuscitate the river Basin they must not be neglected, the government has to work on developing the potential skills abundant in the riverine areas, revive the dying basins and even establish new ones to boost Agricultural production and drive local economy.

"I support the motion the river basin must be carefully studied and resuscitated ".Oduah added

The chief sponsor Sen. John Enoh (Cross River Central, PDP) noted with regret that despite Nigeria 's vast arable lands and abundance of water and river basin resources to induce all year round farming activities she is still trapped in rained Agriculture.

He further stated that the 11 RBDAs created by the Federal government of Nigeria in 1976 is to provide water for irrigation and domestic water supply, improvement of navigation, recreation facilities and fisheries project and is yet to be fulfilled after 39 years.

In his contribution. Biodun Olujimi (Ekiti South, PDP) said the major problems with RBDAs is inconsistency in government policies, adding that it will help boast food production and Agricultural trade if revived.

"We have to ensure that the RBDAS function and function well, and not pay lip service in a change government without the change coming, she added

Sen. Abdullah Adamu ( Nassarawa West, APC) also noted that the objectives of boasting Agriculture will not be totally achieved if RBDAs are not revived.

The Senate resolved to urge the Minister of Water Resources and order related officials to focus on factors militate NG the performance of the RBDAs and proffer critical insight on way forward.

They also mandated the Senate Committee on Water Resources to physically inspect and assess the 11 RBDAs and report back to the senate in 8 weeks.