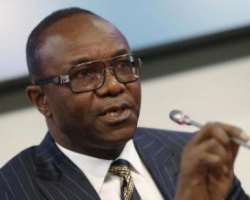 Nigeria may reduce the oil benchmark of $38 per barrel outlined in its 2016 budget if global crude prices continue to fall, the budget and planning minister said on Thursday.

The drop in the oil price to around $30 a barrel, from over $100 in 2014, has prompted the worst economic crisis in years in Africa’s biggest crude producer which relies on oil exports for about 95 percent of foreign earnings.

Minister Udoma Udo Udoma told lawmakers that any review of the oil price on which the record 6 trillion naira ($30.3 billion) budget is predicated could take place as early as June.

“The benchmark of $38 per barrel of price of oil is not sacrosanct because of the subsisting global environment,” Udoma told a parliamentary committee scrutinising the budget, which is expected to be passed by lawmakers on March 17.

“If at mid-year there is no improvement, we would come back to you for mid-term review. The review may come as quickly as June this year,” he said.

Finance minister Kemi Adeosun, who also appeared before the committee, said releasing money from the budget into the country’s monetary system would “stimulate the economy”.

“The economy is slow right now and by the time we start paying contractors and others, the economy will pick up. We expect that from next year, our debt will reduce,” she said.

Nigeria hopes to raise about $5 billion abroad to cover part of its 2016 budget deficit, which is projected to hit 3 trillion naira ($15 billion).

“We have secured debts with Chinese Nexim Bank and the World Bank at very low interest rates. We are borrowing to finance critical sectors of the economy,” added the finance minister.

Brent futures, the global benchmark for crude, were trading around $37 a barrel on Thursday.