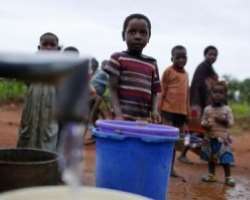 Almost 16 million people face hunger in Southern Africa because of a drought exacerbated by an El Nino weather pattern and that number could climb to almost 50 million, the United Nations World Food Programme (WFP) said on Friday.

“El Nino is progressing toward a potential regional emergency requiring a coordinated response,” WFP said in a report on the unfolding situation.

The figures exclude South Africa, where President Jacob Zuma said last month that 2.7 million households would be affected by the drought.

Regional breadbasket South Africa had its driest year on record in 2015, threatening the key maize crop and pushing spot prices for the grain 100 percent higher over the past year.

For the region as whole, WFP said many areas had recorded their lowest rainfall in 35 years between October 2015 and January 2016, the main planting window for grains such as the staple maize crop in the southern hemisphere winter.

The drought conditions are also hurting livestock, a key source of wealth for many rural households in the region.