Flavour And Chidinma Shut Internet Down With Intimate Photo 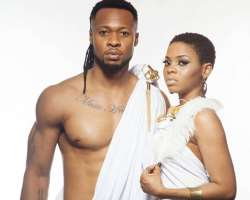 Since their colabo on the hit song 'Ololufe', Flavour and Chidinma have not been able to bath each other clean of dating allegations.
No doubt the video depicts Flavour and Chidinma in some suggestive positions and the song message did not help matters as they profess love to each other.
Although the duo have come out to dispel the dating rumour, clearly stating that whatever they did in the video was professional and had no substance in their real life.

Some believed them just as many wring their noses in disbelief. But just a while ago, the two popular singers posted another intimate picture of themselves on their respective Instagram page.
Since then tongues have been wagging, fans lambasting, while others gave them kudos for coming up with such a nice concept.

Do you really think, Flavour and Chidinma are dating?