Rich list: Dangote is 51st in the world, Remains first in Africa 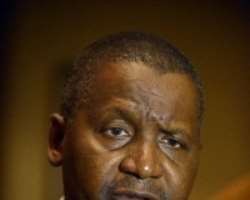 Dangote has remained the undisputed Africa’s richest man,  despite losing $300 million from $15.7 billion  to about $15.4 billion.

In the latest rankings released by Forbes, Dangote maintained his position as the richest black billionaire anywhere on the planet.

Phis wealth Incidentaly is much higher than some globally-acknowledged billionnaires such as the 58-Abramovich ($7.6 billion), Oprah ($6.2 billion) and Trump $4.5 billion.

on the global sphere, software guru Bill Gates remains the richest person in the world with a net worth of $75 billion, “despite being $4.2 billion poorer than a year ago. He has been No. 1 one for 3 years in a row and topped the list 17 out of 22 years”.

Amancio Ortega moves up to the second spot for the first time, displacing Mexico's Carlos Slim, who slips number four, while Warren Buffett remained steady in third position. Facebook's Mark Zuckerberg had the best year of all billionaires, the 31-year-old adding $11.2 billion to his fortune and moved up 10 places from 16 to the sixth spot.

The global economic volatility and plunge in commodity prices also affected the billionaires' list, as the 16 billionaires fell of the list. “Volatile stock markets, cratering oil prices and a stronger dollar led to a dynamic reshuffling of wealth around the globe and a drop in ten-figure fortunes for the first time since 2009,” Forbes said.

“For our 30th annual guide to the world's richest, we found 1,810 billionaires, down from a record 1,826 a year ago. Their aggregate net worth was $6.48 trillion, $570 billion less than last year. “It was also the first time since 2010 that the average net worth of a billionaire dropped – it is now $3.6 billion, $300 million less than last year.” Alakija was negatively affected by the fall in oil prices, while Dangote took a hit due to a fall in the Nigerian currency, naira.

“Her first company was a fashion label that catered to Nigeria's elite women, including the wife of former military president, Ibrahim Babangida, who awarded Alakija's company an oil prospecting license. Alakija's net worth has fallen in the past year as a result of lower oil prices,” Forbes said.

As Africa's largest cement producer, Dangote owns about 90 percent of publicly-traded Dangote Cement through a holding company, a percentage that exceeds the 80 percent ownership ceiling set by the Nigerian Stock Exchange. In 2015, Dangote and 61 others were richer than 3.5 billion people around the world.