#SaveAgatu: Must Nigerians Protest For Every Right? 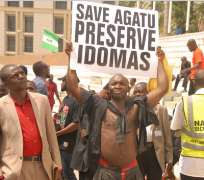 When we campaigned and voted for "Change," one of our hopes was that at last we would be able to take a break from protesting. During the prior years, Nigerians had to protest for every single right. I called it a "Junglocracy" in my article back then, " Junglocracy: For All We Want We Protest ."

All we want, all we ask for, or rather all we beg for is a sensitive government. A government that acts before problems arise. A government that if it misses preventing crisis then acts immediately they arise to abate them.. Is this too much to ask for?

We have not yet settled from our recent #NoBankingDay protest against illegal excessive cabal-bank charges only found in Nigeria and nowhere else in the world; than we have to embark again in protests to Save Agatu from the terror of above-the-law Fulani marauders.

There are likewise several ongoing urgent protests that the government has failed to act on. The Biafra crisis is an undeniable matter that begs for government response. No serious country will ignore protests and an agitation of no less than a million of its citizens. Can we deny that the protests we have seen in the East and abroad do not number up to and over one million aggrieved? Should our government not respond to that and at least officially address our fellow countrymen and upon wise counsel, embark on a referendum to determine the legitimacy of the demand? If really and truly millions do not want to be a part of your nation, can you force them? If you do so, they will continue to embarrass you and will potentially terrorize you.

The #missing705 is still left hanging with no government response. Everyday Nigerians and other of the world's compassionate citizens protest for the government to initiate an investigation into the whereabouts of over 705 Nigerians and the Islamic movement leader, Sheikh Zakzaky. Do we have to always protest for our basic rights to get our government to act? How about a proactive government that immediately investigates how many were killed, if and where they were mass buried, how many are hospitalized and who is responsible, while ensuring all parties including the military agents are suspended from duty till the conclusion of the investigation. Must we live with this level of insensitivity and protest for every basic human right? Do we know that without a doctor certifying the victims dead before they were mass buried, we more than likely buried many alive who could have bene revived? These are the reasons why we expect and pray for a government whose heart is touched by God, who will act urgently on urgent matters.

What is disturbing is that when the "national emergencies" affects member of the administration, then we see the swift unleashing of the State agencies. For instance when the life of the Chief of army was allegedly put at risk, we saw an immediate and extrajudicial deployment and unleashing of force in what has been called, "honor killings." Not a day before that did the government realize that the "Islamic movement" was as accused, being above the law and disturbing ordinary Nigerians in Kaduna. But when hundreds are killed and displaced in Agatu, the same military who then called themselves the "defenders of Nigeria's democracy," are nowhere to be found.

The same has been observed when other administrators are under attack or being "blackmailed." We see an immediate unleashing of Nigeria's top security capabilities and all accused immediately arrested. But in searching for the sponsors of Boko Haram, we must protest first. In demanding the police come and intervene in Agatu and arrest all culprits and liberate the affected communities to then be compensated by the government, we must first carry placards and tweet and retweet. Our Senators are busy buying themselves flashy cars and our executives are too busy flying around the world and painting themselves as infallible angels and us as criminals to care.

Can we get some sensitivity please or do we have to wait another three years for that?