Abe: Most people run away from technical theatre because of calculation 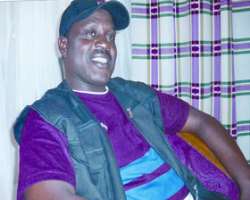 Biodun Abe is a leading set designer in the country, and works at the National Theatre, Lagos. A very talented actor and director, he chose to study Set Design at a time most students would easily

rush to study acting. Abe, popularly known among his colleagues as Kester B, in this interview with TONY OKUYEME explains why technical theatre is not so popular, how he was able to surmount the challenges and other issues.

When Biodun Abe out of curiosity and interest decided to study Technical Theatre, his friends at the time may have laughed at him wondering what he wanted to do with it, especially given his performances as an actor and his skill as a painter. But he was determined and focused, insisting on following his passion. Even when his friends often called him carpenter jocularly, he remained undaunted. Today, many of the popular stage and film productions have his name behind the sets.

Call him a technical theatre activist, and you won't be wrong. But unknown to many people, Abe, former national president of the National Association of Nigerian Theatre Arts Practitioners (NANTAP) had childhood encounters with set designing, as he puts it. “I just went there to study Performing Arts, and all I knew about Performing Arts then was acting, even though I was watching the plays by Jimoh Aliu and the rest of them. But what had always made a difference to me was the backdrop. I did not know what it was made of. It was later I discovered that it was made of canvass. I had a rich background in Theatre right from my secondary school in Ekiti Parapo College, Ido-Ekiti, then in Ondo State,” he said. He added that his background in Physics prepared him for the challenges he encountered later.

“When I was in secondary school, I did Physics in form three successfully because at least, I came second in the examination in forms three and four. With my sense of lighting in Physics, I was the one that constructed the lights that my drama group was using. Then, I used empty cans of milk, local lamp holders and coloured bulbs to do the light. So, when I got to the university where I had so many materials to work with, I became more interested and it became very convenient for me.

“I went to a school where I struggled to light a play with three or four lanterns. Then, I came to the National Theatre in 1986 to watch Ajofest, I saw lights beaming from so many angles. I was so fascinated that I wanted to know who did it and how it was done. I was taking to the carpentry section of the National Theatre where I met Happy Ojadonor, and I told him that I am a student from the University of Ilorin in the Performing Arts department. I wanted to know how he was able to do it. He was the first person to teach me where and how to drive home my first nail, the angle and how to position the hammer too. That experience inspired me and I felt I wanted to do it. Then, I told myself that one day I will come to the National Theatre to do stage design.

According to him, when he went to secondary school, all they knew basically was that acting is all there was to the Theatre, but when he got into the university, other areas of Theatre Art revealed themselves. “We started talking about theatre management, directing and other areas, and we knew that acting is just one of the areas.”

In Technical Theatre, the foundation itself is calculation. It has to do with some Mathematics, such that even when I was studying, I had to attend Physics classes with people doing Physics in the university. So. somebody who ran away from the Sciences because of Mathematics, you then confront him or her with calculations again in Theatre Arts, the person will not be comfortable. That is why you would not see so many people rushing into technical theatre as you see so many rushing into acting. If you rush into technical theatre, you will rush out with same speed.

“But I decided to face it squarely. For me, it is very interesting because of my rich background in Fine Art; I felt challenged that not many people were into it. But, today it is paying me. If you have about four productions going on at the same time, and everyone of them will rely on me to come and create the scenography. It is a thing of joy for me and I followed it from there. But even that time, Technical Theatre was very unpopular because the role that it is supposed to play normally is to enhance the work of the director. The creator of your set and the handlers of your light are not seen. The only people that are seen are the actors. Of course, when the production ends, they meet with the director. Nobody notices the contribution of the set person. I think the only thing that can make set designers popular is when there is an accident on set, maybe the riser crashes and they want to know who did the bad job. But when it is good, nobody knows him.”

Abe believes that the work of a set designer should go beyond just complimenting the work of a director, noting that the work of the theatre is collaboration, so everybody that collaborates in this endeavour called 'theatre' should be relevant. “I believe that without the scenographer, the action cannot be situated. And I also realised too that the person that does the job as a scenographer has to read the script to situate the actions. At the end of the day, when everybody is through with the production, he is the one that remains on stage to strike the set. The scenographer is faced with so many limitations, the most terrible of such limitations is the limitation that the scenographer has imposed on himself, which is by agreeing to play the second fiddle, which I will not subscribe to. For instance, I pioneered the effort that made an issue that there is no way a playwright will lock himself up for a year or more writing a script, develop the script for about three or four weeks; he now gathers the crew and cast, the actors then rehearses the same play for about six weeks minimum, and you want the scenographer to come and do his work in one hour. You realised that even when you are not through with the set, everybody will be shouting that you are delaying them. I am saying 'no' to this practice. It is a creation process too. You have got to give me the time to do my work. I must have time to do my own work as the director also has the time to do his own job. My job too has to be okay. Yes, I compliment the effort of the director, but the age we are in now is the age were even the playwright and the director have little or nothing to say at all and they have to rely on the scenographer to say something on their behalf. That is why you see glamour now on stage, instead of the scenographer playing the subtle role.

Who says I cannot arrange lighting designers from all over the country and organise a programme to display the new things that we have in lighting, and invite people to come and watch it. And all the audience will pay for, is to come and see lights, effect. The world we are in is not static; it is dynamic, so every aspect of our lives as inhabitant must be dynamic. My own calling should not be an exception. I think that is just the background. So, what we are saying is that what it used to be years ago when all we knew about acting is somebody jumping on stage and acting and the rest of them, and it does not matter whether what you put on stage. That era is gone. Modern Nigerian audience or even in the diaspora, want to enter the theatre hall and see something that is aesthetically pleasing,” he hinted.

He recalled with nostalgia that in 1993 when he designed the set of Lamgbodo, after the command performance at the University of Lagos, that was the show sponsored by NIB, now City Bank. The actors and the rest of them were introduced. People in the auditorium started shouting that they want to see the designer. “They compelled them to call me out because they were impressed with what they saw. What I did on that set was to create a rocky landscape that appeared very real to the audience. I turned the ambience to a mountain, such that even when the NIB officials came to preview the show in Ife where we were rehearsing. They had told the late Wale Ogunyemi, the playwright and director, that they wanted to see the rehearsal on set, having paid for everything. When they came to set up their camera, they were surprised to see rocks on set and demanded Ogunyemi to show them the set. When he told them that what they saw was the set, they did not believe him until he told me to open the first component of the set. They were amazed. They did not know it was created by me. That is the kind of art that I want to be doing as a scenographer, not just to compliment the effort of the director. If you feel my set will shift attention from you, then be more creative as a director. Try and surpass what I have been able to do because it is not the best in the world. Try and match or surpass what I have been able to do so that there will be an art that is total, from the point of view of directing, from the point of view of set, light, and costumes and make-up. That is my take on it.

How he got the IBB award

During my youth service, I was posted to Lagos to teach in a primary school. I was also coming to the National Theatre too to watch what was going on and soon I started. After my Youth Service, I got a national award from the then Head of State, General Ibrahim Babangida with an automatic employment at the National Theatre. That was how I started working here, and since then I have been working without losing focus. I have been acting and directing too. As a matter of fact, my project in school was on Directing, not Technical Theatre.