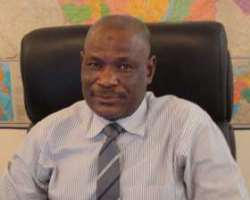 By Kester Kenn Klomegah
Nigeria is considered the economic powerhouse in the West African region. As it is also popular known, Nigeria is one of the Africa's fastest growing economies and it boosts the largest population. After the change over of the presidency in May 2015, from H.E. President Goodluck Jonathan to the newly elected leader H.E. President Muhammadu Buhari, Nigeria is ready to take practical steps to continue bolstering economic and strategic ties with Russia.

Now, new hopes in Moscow and Abuja are that the countries' annual commercial ties have to increase rapidly to billions of dollars during the next few years. Russia plans to help Nigeria explore for oil and gas. Furthermore, Russia has expressed deep interest in Nigeria, helping it build nuclear power plants, petroleum pipelines, railways and infrastructure.

In this interview, Mr. Ibrahim Usman Gafai, Charge d'Affairs at the Embassy of the Federal Republic of Nigeria in Moscow, talks assertively about the current Nigeria and Russia economic relations, ways to improve trade, trade preferential agreements and key foreign policy priorities as well as his country's readiness to take leadership roles in regional affairs. Additionally, he shares high hopes and optimism for the future.

Russian investment in Nigeria covers such areas as energy, iron and steel, and hydro carbon. Over the years, we have witnessed the establishment of Russia-Nigeria Business Council (RNBC) which oversees economic activities between between the two countries. So far, the two countries have held three meetings of the Joint Commission, the last being in 2009. The Joint Commission is the platform for the two countries to sit down and draw up agreements and Memorandum of Understanding (MoU) on how to conduct businesses and investment in each other’s country.

One of the strategies is to encourage trade promotion through solo exhibitions of good made in each other's country. Nigeria businesses are encouraged to carry out such solo exhibitions in Russian cities such as Moscow, Saint Petersburg, Krasnodar and Kuzbas regions.

On the other hand, Russian businesses are also encouraged to participate in various annual trade fairs organized by different Chambers of Commerce in Nigeria. In addition, we will continue to call on the two countries to create an investment forum to showcase their potentialities in each other's territory. The major challenge facing investors from both sides of the divide is dearth of information on each other's business environment. This has, over the years, created a condition of uncertainty and misgivings among prospective investors.

Trade Preferential Agreement between the two countries: The Russian Federation has continued to extend preferences in trade not only to Nigeria but also to Africa as a whole. However, as earlier mentioned, this opportunity has not been exploited due to dearth of information. There is therefore the need to create a mechanism for the dissemination of information that will enhance business interaction between Russia and Nigeria, and indeed, between Russia and Africa.

In the power sector, Nigeria and Russia had in June 2012 signed an agreement on the design, construction, operation and decommissioning of nuclear power plants in Nigeria. The implementation of this agreement has reached an advance stage following the establishment of a Joint Coordinating Committee (JCC), which has met severally to ensure timely and uninterrupted implementation of the agreement.

Other economic sectors attractive to foreign investors: The first impressive thing about Nigeria is its population. With a population of over 160 million people, Nigeria therefore constitutes the largest market in Africa. To compliment this, Nigeria is currently the largest economy in Africa. Other economic sectors that may attract foreign investors include, among others, power, agriculture, solid minerals, oil and gas, infrastructural development and iron and steel industry.

The Nigerian government has set up the Nigeria Investment Promotion Commission (NIPC) which is seized with the responsibility of initiating measures that will enhance the investment climate for both Nigerians and non-Nigerians (foreign) investors.

Opinion on key foreign policy priorities of the new government: The 2015 general election in Nigeria has recorded tremendous success for the development of democracy in Nigeria in particular and for Africa in general. The newly elected President Muhammadu Buhari has assured the international community that Nigeria will continue to be responsible and key player in the comity of nations. His Excellency President Buhari has further made it clear that Nigeria is ready to take up regional and African leadership role whenever the need arise or called upon to do so.

Do you think there will be some policy changes toward Russia: Political relations between Nigeria and Russia have remained cordial since the establishment of diplomatic relations in the 1960s. The two countries have always supported one another in different international fora. Russia is currently supporting Nigeria in its fight against insurgency in the northeastern part on Nigeria. Nigeria is highly appreciative of this support.