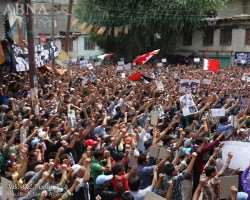 The Catholic Pontif Pope Francis has cautioned the Nigerian authorities to stop killing Biafra agitators but urged for peaceful negotiations.

According to the text of the Catholic Pontiff’s address to thousands of members of the Indigenous People of Biafra who gathered last Sunday at the Vatican City for the weekly Angelus, the Pope has cautioned Biafran oppressors – the Nigerian government and its military and their agents – to repent from the evil act.

The globally- reverred religious leader said further that failure to  stop killing Biafra agitators would precipitate the wrath of God that will be catastrophic.

The text of the Catholic Pontiff address which was made available to Vanguard by the IPOB Media and Publicity Officer, Mr. Emma Powerful, disclosed that the Pope advised the Biafra agitators and the crowd that gathered at St Peter's Square from the balcony of the Apostolic Palace.

He urged them to be patient in all they are doing, that God's patience towards their oppressors is without limit but the time to end their oppression is now.

Pope Francis IPOB quoted the Pontiff to have said that “it is never too late to convert an oppressor to change from his evil activities, including murderous activities, but it is urgent, it is now, let them begin today to change from their oppression and killing of innocent people through all sorts of violent means, including the jack boot of the military.”

The could further claimed that  the Pope spoke on “invincible patience,” explaining how God's “unyielding concern for sinners” should provoke patience in us.

He quoted to have asked,  “ Have you thought of His unyielding concern for sinners, how this should provoke patience among people, including governments, instead of killing people on slightest provocation or no provocation at all, let alone people who are protesting against unfair treatments or for something they feel is their right?”

The group further claimed that the Pope told them that God does not permit tragedies to punish sins but rather, that Jesus uses warnings that sinners will perish if they do not repent, adding that if the oppressors of peaceful agitators like the Biafra agitators in Nigeria fail to repent, the wrath of God will be catastrophic against them.

The Pontiff welcomed the need to firmly and unreservedly focus on negotiations and dialogue between governments and agitators all over the world including Biafra agitators and the government of Nigeria, like it was done in Syria which has brought the current ceasefire in the country, involving government and rebel forces.

The pope added, “I invite all to pray so that this window of opportunity can give relief to the suffering people and agitators and encourage the necessary humanitarian aid, and open the way to dialogue and much desired peace.”

Meanwhile,  the Movement for the Actualization of Sovereign State of Biafra has condemned the plan by the Norwegian government to illegally deport Lotachukwu Okolie, the detained leader of pro Biafra agitators in Norway and his counterpart Onyedikachi Ani, and other Biafra activists in the country.

MASSOB said in a statement by its leader Mr. Uchenna Madu, that the case of Ani is even more pathetic given that he is married to a Norwegian with whom he has a child.

The statement reads, “Norway and Nigeria have already perfected plans of deporting them through chartered cargo airplane from Belgium, to transport them to Lagos on March 9, 2016. The information we have is that the Norwegian government have struck a deal with Nigerian Immigrations Service, in Lagos to accept all the deportees and bypass the embassy which knows about their pro Biafra activities but cooked up lies against them and consider them threat to Nigeria security, which means they will be eliminated on arrival.