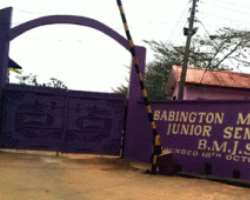 Vanguard gathered that a similar incident happened on January 22, but the operation was foiled by the school internal security.

The abducted girls were of the Science department.
The gunmen, reportedly stormed the premises of the boarding school located at Agunfoye-Lugbusi village at about 8pm.

N100m ransom
Vanguard reliably gathered that the kidnappers demanded N100 million ransom for the release of each student. As at 4pm yesterday, they were still in contact with the school.

The kidnappers reportedly scaled the school's perimeter fence and announced their presence with sporadic gunshots while the students were having their night prep in their classes.

This caused pandemonium as the fear stricken students who did not know where the shots were coming from, scampered in different directions for safety.

They thereafter, took the students into their vehicle that was parked along a bush path and zoomed off.

Identities of the abducted students which Vanguard confirmed at press time, are being kept secret by security agents and the school authority.

Parents besiege school
Distraught parents were said to have besieged the school when news of the invasion reached them. As at 4pm yesterday, some of them who lived outside Lagos were sighted driving into the massive school premises.

A parent who spoke to Vanguard on condition of anonymity said “I arrived the school at about 8am yesterday. Luckily, my three children who are in JSS 1 to 3, are safe. They said they thought the gun shots was fire crackers . It was not until they sighted one of the gunmen that they attempted to run into their dormitory for safety.

''One of my children sustained injury. My eldest son said he hid under his bed but later left in search of his siblings. He said he ran back when he saw one of the gunmen dragging a student outside. He could not state whether the student was a male or female.

''When the dust settled, she said they were all crying . My last child even said I should take her out of the school but I assured her a thing like that would not happen again.”

'Things under control'
The school authority as gathered began a prayer session immediately the gunmen left . The prayer session which centred on the safety of the abducted children was still on at about 4pm yesterday.

They also sent text messages to all parents assuring them that the situation was under control.

The text message sent to parents read: “Dearly beloved parents, the unfortunate incident reported is under control and the three parents have been contacted. Please continue to pray with us and we assure you that all will be well . Kindly keep calm , your children are safe.”

As at yesterday, activities in the school were on hold. The test earlier billed for the day was cancelled as the students were asked to remain in their hostels.

When contacted on phone, the school's principal, Venerable, Ola Oluwa, picked the call but could not say a word.

The Lagos State Commissioner of Police, Mr Fatai Owoseni and some senior police officers, visited the school at about 4am.

Contacted, spokesperson for the command, Dolapo Badmus, a Superintendent of Police said; “Yes, three students were taken away by some criminals on Monday night.

”Investigations are on to track them. At this moment we can not give you more information but you will be briefed as events unfold.”