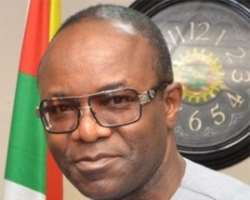 The Nigerian National Petroleum Corporation has taken delivery of four more cargoes of petroleum products over the weekend to keep the country wet, the corporation’s spokesman Mr Ohi Alegbe said in a statement on Monday.

Alegbe, Who is the Group General Manager, Group Public Affairs Division, in the NNPC assured the public of sufficient supply of Premium Motor Spirit (PMS) across the country.

“The deliveries which amount to about 180 million litres is part of a new arrangement by the corporation to have a cargo of PMS delivered daily as from March,” it said.

According to the statement, the Minister of State for Petroleum Resources, Dr Ibe Kachikwu, has warned depot owners against selling petrol above the approved ex-depot price of N77 per litre.

It said that the warning came against the background of repeated complaints by marketers of sharp practices at the depots.

It warned that depot owners found to be involved in selling products above the approved ex-depot prices would be severely sanctioned. The News Agency of Nigeria reports that there is sudden appearance of queues in some filling stations in the Federal Capital Territory. Some of them are NNPC stations, AA Rano, Mobil and Conoil all located on the same express road.