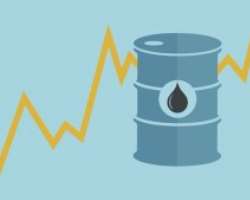 Oil has stopped crashing.
Investors around the world freaked out when oil prices plummeted to a 13-year low of $26.05 a barrel on February 11. But they are now sitting at $34 a barrel, marking an incredible 30% spike in the span of just 11 trading days.

The ridiculous surge from the recent lows reflects a swing in sentiment, even if it’s not a dramatic shift in the fundamentals. The world still has too much oil and U.S. production hasn’t slowed enough yet to ease the epic supply glut.

Hope has been fueled by OPEC. Saudi Arabia, Russia and other producers agreed to a tentative deal on February 17 to freeze output.

“That was the trigger. It helped us reach a bottom in oil,” said Rob Thummel, a portfolio manager at energy investment firm Tortoise Capital.

However, that freeze deal requires the participation of other producers like Iran. Officials from Iran recently blasted the freeze as a “joke” and told CNN on Monday the country still plans to significantly ramp up output now that sanctions have been lifted.

“The recent output freeze talks are unlikely to have any immediate impact on market balances,” Barclays wrote in a report. Analysts also pointed out that the countries that have agreed to freeze production are already producing close to their full capacity.

Still, Barclays said the freeze talks represent a “litmus test for building trust” and have raised the still-unlikely chances of coordinated action from global producers.

Of course, oil remains in a huge hole. Despite the recent rally, oil prices are down by nearly half from a year ago when they were sitting at $62 a barrel.

And it’s hard to be too enthusiastic about oil’s prospects given the enormous supply glut in the U.S. Crude oil inventories increased by another 3.5 million barrels last week to nearly 508 million barrels, according to the Energy Information Administration.

Sky-high inventories are raising concerns that certain storage facilities will soon run out of room to keep all that crude.

The supply glut continues to be fueled by very high U.S. production. Despite the crash in prices, the U.S. pumped 9.32 million barrels per day in November, according to the latest government figures. That’s only 4% below the April 2015 peak.

“It’s been exceptionally resilient, more so than anybody expected,” said Smith of ClipperData.

Oil bulls believe production will fall sharply in the second half of the year when many oil drillers are forced to switch off production due to the cheap prices. U.S. oil rig counts have declined for 10 straight weeks and are now down 25% this year alone, according to Baker Hughes.

But that doesn’t mean oil prices are going to skyrocket back to $80 a barrel. Higher oil prices — even in the $40 to $50 range — will just encourage U.S. shale producers to start pumping aggressively again, renewing the oversupply problem.

“There is definitely a lid on prices,” said Smith.