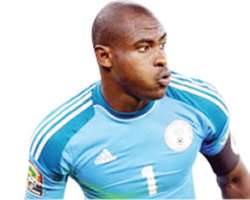 Lille of France goalkeeper, Vincent Enyeama, has said his days with the Super Eagles are permanently over, after reports linked him with a return to the team.

Enyeama quit the national team he served for close to 17 years on October 8, 2015 after a row with coach Sunday Oliseh in Belgium.

Oliseh announced his resignation from the team last Friday, with coach Samson Siasia taking over the reigns in an interim basis. Enyeama and coach Siasia also had a showdown during his first spell with the Eagles.

'I don't want to talk about this issue again. I think my earlier decision stands,' Enyeama said yesterday on BrilaFm.

In his absence, Carl Ikeme who ply his trade in the English championships with Wolves stepped in. But fans were far from convinced about his ability based on his performance with his club.

With the must win African Cup of Nations qualification match against Egypt looming, there were speculations that Enyeama will make a comeback to the team.

Siasia is yet to annouce his plans, but he is expected to do so on Thursday, when he meets with the Nigeria Football Federation technical committee.