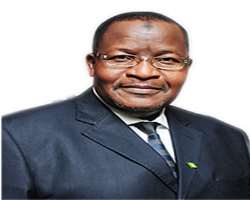 The Nigerian Communications Commission, NCC, made a perfect hit last week when it chose the platform of the Social Media Week which held in Lagos from February 22-26, 2016, to draw the attention of netizens to the Cybercrime Act which was signed into law in May 2015. Addressing a very youthful population who mostly live their life in the cyber ecosystem, the Executive Vice Chairman of the Nigerian Communications Commission, Prof. Umar Garba Danbatta charged them to acquaint themselves with the contents of the Act in order to be properly guided in their cyber operations.

Speaking through Mr Tony Ojobo, Director, Public Affairs, at the main stage event, Danbatta observed that the Cybercrime Act has become law since May last year; it was therefore imperative for New Media practitioners to familiarise themselves with the contents of the law as it affects their practice. Pointing to various sections of the Act, he explained that the Act does not encumber freedom of expression as erroneously believed but instead it seeks to protect those whose freedom may be damaged by the freedom freely expressed by others.

For instance, Section 24 of the Act, Danbatta pointed out, deals with Cyber stalking and prescribes punishment for “Any person who knowingly or intentionally sends a message or other matter by means of computer system or network ” which, among others, “he knows to be false, for the purpose of causing annoyance, inconvenience danger, obstruction, insult, injury, criminal intimidation , enmity, hatred, ill will or needless anxiety to another or cause such message to be sent: Commits an offence under this Act and shall be liable on conviction to a fine of not more than N7, 000, 000. 00 or imprisonment for a term of not more than 3 years or to both such fine and imprisonment.”

In addition to Danbatta’s paper, the Commission raised a team of technocrats and industry practitioners to help bring more understanding to the document which everybody agreed is still very fresh in the public domain. In fact a blogger who was one of the first victims of the Act and spent some weeks in Ikoyi prisons while waiting to perfect his bail, threw the gathering into some bout of laugher when he informed that his lawyers were arguing over the existence of the Act even as he was being shepherded to his temporary home. The discussants include: Messrs. Nnamdi Nwokike, Director, Corporate Planning and Strategy, NCC; Taiwo Obe, Founder and Director, Journalism Clinic; Mideno Bayagbon, Editor, Vanguard Newspapers; Basorun Adetunji, New Media and Information Security, NCC; Folorunso Mesele, Information Technology, NCC; and Mrs. Afure Iloka, Legal and Regulatory, NCC.

In his intervention, Danbatta who acknowledged the contribution of the media to the growth of the telecommunication industry, and also in bringing the sector to global attention, pledged that under his watch the NCC would be happy to associate with anything that can add value to the practice of journalism, especially in the area of capacity building, and thus help to prevent unpleasant consequences arising from needless infractions.

The panel which shared some of the sentiments expressed in Danbatta’s interventions also agreed on the following: although there is press freedom, such freedom must be exercised with responsibility; the things we do in the practice of our profession can hurt others very badly and cause them so much distress in life; media practitioners should desist from racist and xenophobic offences which include tribal and religious profiling; there is the need to be informed that computer has gone beyond that mainframe in that office, the desktop or the laptop which can send messages, to include the small handheld devices that are quite pervasive nowadays; the Act deals copiously with child pornography and is quite explicit on the fact that you do not need to be the originator of content before committing an infraction; there is the need to study the Act to know what constitutes financial crimes in electronic transactions.

Although the NCC could enjoy some satisfaction and a sense of fulfilment from the confessions of some of the key participants that they had never heard or seen the Act before the NCC Session at the Social Media Week, there were quite a few people like Omoyole Sowore of Sahara Reporters and Gbenga Sesan of Paradigm Initiative Nigeria who were unhappy with the content as it could affect new media practice, while some saw it as the handwork of some politicians who do not want their corrupt lifestyle to be reported.

However, Prof Danbatta hailed the quality of discourse and noted that the Commission has achieved a major aim of initiating dialogue on a vital document that could have far reaching effects on social relationships, businesses and modern lifestyle.