Cosmic Transition Of Thinkers Of Our Time: A Tribute To Boutros Boutros-Ghali De Thinker 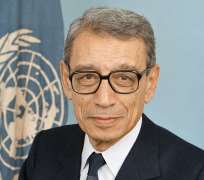 (Onitsha Nigeria, 28th of February 2016)-The leadership of International Society for Civil Liberties & the Rule of Law is deeply concerned over the utter alacrity with which the world of our time is losing to cosmic world in an uncontrollable speed, our few and irreplaceable thinkers who are endowed with great potentials to steadily make our world a pride place for earthly living; particularly in the area of coherence, convergence and intercourse between living things (humans, plants, animals and other living species) and environment. The humans in living world generally are composed of thinkers and tinkerers.

Of greatest of the two are thinkers, whose outputs or products or potentials are derived from research and creative thinking; which in turn, are transformed into discoveries and inventions. While discoveries through research bring hidden natural endowments into formal existence for human usage and consumption, inventions are brought about through mental creation of things that never existed, for the purpose of societal advancement and development. Thinkers are also creators of industrial societies and communities; while tinkerers create and sustain primordialist and turbulent ones.

It is an incontestable reality that research powers the world. The world is steadily in fervent need of change through discovery and invention of new things. Thinkers are traditionally hidden away in laboratories, libraries, offices, thick forests, underwater, space and archives assisting God in their natural capacities as small gods in making our world a best place of living. They also periodically mingle on the city streets, unrecognized by others; with surging tides of everyday life. These individuals tirelessly toil and work; discovering facts that will make the world of today different from world of yesterday and tomorrow and world of tomorrow greater than world of today.

He was a vice minister in the government of Muhammad Hosni El-Sayed Mubarak, who ruled Egypt from 1981 to 2011. Late Prof Boutros-Ghali was appointed the sixth Secretary General of the United Nations from 1st of January 1992 to 31stof December 1996. He also hailed from Asyut tribe in Egypt and was born into Coptic (orthodox) Christian family. His tribe (Asyut) is the oldest Christian community in Africa; having embraced Christianity between 43AD and 64AD, few decades after the death of Jesus Christ. Their conversion to Christianity was effected through missionary ingenuity of Coptic Saint Mark De Evangelist, the first Christian crusader in Africa, who later became the Coptic Pope of Alexandria in Egypt.

One of the few dark spots of Prof Boutros Boutros-Ghali’s era as the UN Secretary General was the Rwandan Genocide of April-July 1994 in which over one million Tutsis and moderate Hutus were slaughtered in less than four months. The eruption of the genocide was largely blamed on non-heeding of early warning signals by relevant European powers including Germany and Belgium, which colonized the country as well as double standards and other political, economic and diplomatic interests of relevant foreign and regional powers including Congo DR and Uganda.

The two most celebrated and innovative developments that took place when Prof Boutros Boutros-Ghali was the United Nations Secretary General were the development by the United Nations Development Program (UNDP) concept of Human Security; developed in 1994; and Prof Boutros-Ghali’s seminal piece, called “An Agenda for Peace”; published in 1992. The two innovative developments were in response to the destructive effects of the end of the cold war, which gave a spiral rise to Intra State or internal violent armed conflicts. The two developments critically sought to move the world attention from culture of warfare and violence to culture of sustainable peace (agenda for peace) and critical investments in human development (human security); using food security, political security, physical security, community security, economic security, environment security and health security.

Prof Boutros Boutros-Ghali’s Agenda for Peaceis also referred as Peace Building; which he defined as “actions to identify and support structures which will tend to strengthen and solidify peace in order to avoid a relapse into conflict as well as rebuilding institutions and infrastructures torn apart by civil war and strife and tackling the deepest causes of conflict: economic despair, social injustice and political oppression”. The concept of Peace Building has since been expanded to include: peacemaking, peacekeeping, peace enforcement and conflict prevention/management. Under the auspices of the United Nations, these are referred as “peace enforcement operations”. The Peace Building, as a multidimensional approach; has further been escalated to include totality of efforts aimed at building strong and sustainable political institutions powered by human rights, rule of law and justice reforms, democratic pluralism, political inclusion and tolerance and good governance so as to ensure sustainable peace or absence of personal and structural violence.

Another sad reminder of the demise of Boutros Boutros-Ghali De Thinker is the age-long of persecution of the Asyut Coptic Christians by the present and successive governments in Egypt as well as by radical non-State actors or radical Islamic movements. The Asyut Coptic or Orthodox Christians are the first and oldest Christians in Africa; having embraced Christianity as far back as between 43AD and 64AD through the missionary ingenuity of coptic Saint Mark De Evangelist. The Egypt’s Asyut Coptic Christians have consistently faced extermination and persecutions, leading to over 2million of them escaping and living in US, Canada, UK, Australia, etc. Many have been forcefully converted to Islam including 50,000 Asyut graduates who were forcefully converted to Islam between 1988 and 1990. The Asyut Christian population in Egypt is presently estimated at 6million of about 8% of the Egyptian population. Those who have refused to be converted to Islam are steadily made to face acute marginalization and alienation in Egypt till date.

Though Boutros Boutros-Ghali De Thinker died at the celebrated age of 94, but his type ought not to die because they are hardly come by in centuries. The Agenda for Peace and the Human Security developed under his tenure at the United Nations are two most striking achievements of the UN in recent times. The two documents are pacesetters capable of moving the world away from the use of violence in settlement of intra and inter State conflicts to use of peaceful means for resolving such deadly disputes. They are also geared towards ensuring utmost care and provision of basic or fundamental human needs to human living population and preservation of environment during enduring culture of peace and absence of war. The two innovative developments are comparatively the greatest reforms carried out at the United Nations since 1945.

We call for immortalization of Boutros Boutros-Ghali De Thinker by the authorities of the United Nations. The best way to immortalize late Prof Boutros Boutros-Ghali by his home State of Egypt is to prohibit or outlaw all forms of State sanctioned religious discrimination and persecution against his Asyut tribe or population and ensure that they are protected at all times against radical Islamic groups and individuals impeding on their rights to freedom of thought, conscience and religion. They must also be allowed unhindered access to the country’s public services, resources and offices in accordance with the United Nations Covenants on Civil & Political Rights and the Economic, Social & Cultural Rights, which Egypt signed and ratified.

Globally, Prof Boutros Boutros-Ghali should be immortalized by member-States of the UN and existing 591 armed opposition groups (armed non-State actors) around the world; by eschewing violence and embracing peace as the most effective mechanism for resolving individuals and groups’ disputes and conflicts. The political office holders in Africa who have turbulently and violently turned themselves into life and brutal dictators and despots must immortalize Prof Boutros Boutros-Ghali and his epochal “Agenda for Peace” by quitting their life hold on political office and power. The leaders of Zimbabwe, Angola, Equatorial Guinea, Cameroon, Gambia, Rwanda, Togo, Democratic Republic of Congo, Congo Republic, Rwanda, Burundi, Uganda, Sudan, Comoros, Algeria and Chad who are Africa’s longest serving dictators must bow out in honour of late Prof Boutros Boutros-Ghali and his “Agenda for Peace”.

Other African leaders like Retired Gen Muhammadu Buhari who have adopted “economic despair, social injustice and political oppression” against their nationals, wholly or in part; must reverse such barbarous policies in honour of one of the Africa’s greatest minds of the 20thand 21st centuries; late Prof Boutros Boutros-Ghali. African Continent must be rid of dictatorship, personal and structural violence which cumulatively breed mass poverty, under-development, unemployment, diseases, malnutrition, famine, drought and deadly and violent conflicts.