Some women dress for fellow women not men… Halima Abubakar 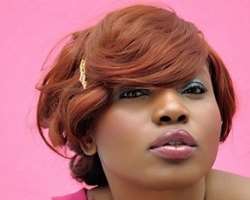 Vibrant actress and producer, Halima Abubakar, is one of the most sort after actress in the industry.

Her curves and fashion sense is always a subject of discussions, as she always slays whenever she steps out for an event.

In a recent interview with The Nation, the actress who talked about herself, disclosed she started acting at age 15 and for the first three years, she never had a major role.

Persistence and passion, she said, made her attain success. She went on to say, she is yet to attain the type of success she wants, but she is grateful for what she has thus far.

However, the actress also revealed she would not get married to an actor, nor get married for marrying sake or because of age and pressure.

Halima is not in a haste to settle down, but would choose a partner, when she thinks she is ready.

Ladies are good in showing off, but this gorgeous actress is saying, she do not live her life in that manner, and she realized that men don't even notice women, with the expensive lipsticks , attire and accessories they put on.

She is of the opinion that women dress for co-women, due to gossips and mockery that lingers in the lips of women when they see you under dressed.

In her words: “It was not easy to do it. It took me almost 10 years of my life, I have been acting for probably 15 years now. For the first three years of my life in Nollywood, I shot only two movies and there was no line. That is what is called 'waka pass'. We keep spending N6,000 on a particular brand of lipstick, yet men don't even notice it. But your fellow woman will sit down somewhere and start saying, 'Oh my God, is that this or that?' I keep saying that some women dress for their fellow women not for men. That's because men just look at probably your shoes, wrist watch or your handbag or hair style. Though every man has what he looks at, but most often it is the way you talk, your intelligence.”