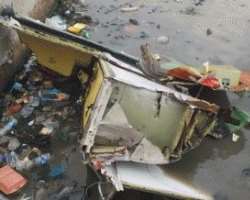 A Nigerian registered helicopter with number 5N-BQH owned by a yet to be named politician from the Niger Delta crashed in Benin Republic on Thursday, but no life was lost in the incident.

It was garthered that the helicopter, an airworthiness aircraft meant for private use, was contracted for commercial purposes by a presidential candidate in Benin Republic who wanted to use it for election campaigns before it crashed.

A confident source at the Nigerian Civil Aviation Authority (NCAA), who confirmed the accident, said the helicopter's tail rotor clicked on an object and the pilot lost control of it.

“I can confirm that the helicopter was involved in an accident and it is beyond our jurisdiction because it happened outside Nigeria. But we are monitoring things, although I do not have much details yet. But the accident investigation body from that country will have to find out the cause of the accident and the extent of damage done to the aircraft,” the NCAA source said.