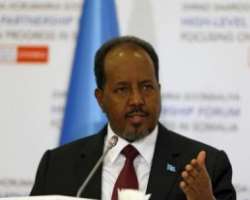 As many as 200 soldiers were killed in an attack on a Kenyan military camp in Somalia by al Shabaab Islamists last month, Somali President Hassan Sheikh Mohamud told a television station, although Kenya rejected the figure.

Kenyan authorities have refused to give a death toll following the Jan. 15 raid, which targeted troops working under the African Union Mission in Somalia (AMISOM) near the southern Somali town of El Adde.

Newspaper pictures of coffins draped with Kenyan flags bringing back dead soldiers after the attack increased the disquiet from ordinary Kenyans and the opposition alike over Kenya’s continued presence in Somalia.

Al Shabaab later distributed photos purporting to show the bodies of dozens of Kenyan soldiers, many apparently shot in the head.

“When about 200 soldiers who came to help your country are killed in one morning, it is not something trivial,” Mohamud told Somali Cable TV, a privately owned station. The interview was posted on YouTube on Thursday.

“We have been winning for years and months but that El Adde battle, we were defeated. Yes, in war, sometimes something that you do not like happens to you,” he said.

Kenya sent soldiers into Somalia in 2011 after raids in the border region and kidnappings that threatened the tourism industry in the region’s biggest economy and wider regional destabilisation. It later joined the AMISOM operation.

Al Shabaab’s attacks in Kenya have included a raid by gunmen on the upscale Westgate shopping mall in 2013 and a university in Garissa in 2015. Hundreds of people have been killed in al Shabaab attacks in the past two years.

Kenya Defence Forces spokesman, Colonel David Obonyo, denied the number given by the Somali president and questioned the source of the information.

“It is not true. This information never came from us or anyone in the government of Kenya,” he told Reuters.

The al Qaeda-aligned militants have been driven out of major strongholds in Somalia by AMISOM and Somali army offensives, but the group still controls some rural areas and often launches guerrilla-style assaults and bomb attacks.

Al Shabaab, which has links to al Qaeda and seeks to overthrow Somalia’s Western-backed government, initially said it had killed more than 100 soldiers in the attack.

The group, which is also seeking to drive the AU force out of Somalia, often says its attacks against Kenyan targets are retaliation for its participation in AMISOM, which also includes Uganda and Burundi.