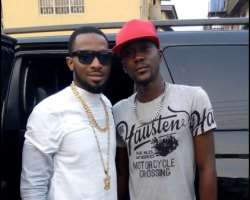 According to Pulse, the producer in a chat with them revealed that the beat of the song was more or less stolen from him, as he didn't get any credit, payment or compensation for it. Read the full story here.

However, hours ago, P-Loops took to social media to debunk the tales flying around about him accusing D'Banj of theft.

He tweeted:
This is to clear the air that I’ve been paid fully for the Emergency beats production. I don’t know where this rumour is coming from.