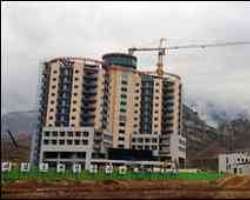 The North will either take ownership of the facilities itself or hand them to a new tourism partner, says state news agency KCNA.

Pyongyang has been angered by Seoul's suspension of tours to the resort, which was developed by a Southern firm.

The move comes as tensions rise over an unexplained blast which sank a South Korean ship, leaving more than 40 dead.

A North Korean tourism official said the properties were being confiscated “in compensation for the damage the North side suffered due to the suspension of the tour for a long period”, KCNA reported.

The five facilities to be seized include a fire station, a duty free shop and a Red Cross-built centre to host family reunions.

The official said the properties would be returned to state possession or “handed over to new businessmen according to legal procedures”.

All remaining assets will also be frozen and South Korean personnel expelled from the resort, said KCNA.

Ship link
The BBC's John Sudworth in Seoul says the wrangling over Mount Kumgang – once seen as a beacon of hope for inter-Korean relations – has been going on for months but this is the most serious step the North has taken so far. KUMGANG RESORT

Joint tourist resort developed with money from the South

Key source of foreign currency income for the North

South suspended tours in 2008 after a tourist shot dead

The resort had been a lucrative source of income for North Korea, until Seoul suspended its tours after a South Korean woman was shot dead there.

South Korea says it wants the killing – when the tourist allegedly strayed into a military area – properly investigated before it allows tours to resume.

Pyongyang's statement on Friday also made a clear link between the property seizure and what it perceives to be South Korean claims that it was behind the sinking of the Cheonan warship last month.

The statement said Seoul had been “deliberately linking” the disaster to Pyongyang.

Fifty-eight crew survived, but 46 sailors died when the ship went down close to the sea border with North Korea on 26 March.

South Korean media has speculated that the North was responsible, but officials have been more circumspect.

Pyongyang has denied any involvement and accused the South of making “a foolish attempt” to implicate them.

North and South Korea are technically still at war after the Korean conflict ended without an armistice in 1953.

Our correspondent says there had been high optimism of reconciliation a few years ago, but relations began to deteriorate and now appear to be at their lowest point in a decade.