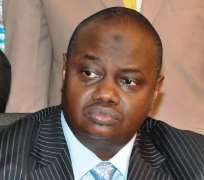 The Chairman of the committee, Senator Samuel Anyanwu, presented the report of his committee to Senate in plenary.

Anyanwu told the Senate that after a series of invitations, the former EFCC boss failed to appear.

The committee chairman referred to three letters of invitation to invite Lamorde to appear before the committee on August 19, 2015, November 3, 2015 and November 11, 2015.

Ekweremadu said: 'What is required here is for the committee to issue a warrant of arrest and the president of the Senate will direct the police to effect the arrest.'

Saraki said: 'The issue has been well spelt out by the deputy Senate president, he has referred to the constitution. Based on the Constitution, this matter does not need to come to us at plenary. It should be left at the level of the committee and in accordance with Section 89 of the Constitution. So I will sustain the point of order of the DSP.'