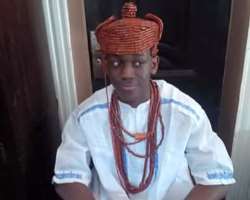 The leadership of the All Progressives Congress (APC) in Delta State has congratulated the newly crowned royal father of UBULU UKU KINGDOM, His Royal Majesty, Obi CHUKWUKA AKAEZE I who recently ascended the throne of his great ancestors.

State party leader and Urukpe of Evwreni Kingdom, Olorogun Otega Emerhor (OON) in a statement released by his Director of Media and Publicity, Dr Fred Latimore Oghenesivbe said the crowning of the seventeen years old monarch is a typical reflection on the rich culture and tradition of the Ubulu Uku nation.

He said Delta APC family received the good news with joy especially at a time when UBUKU Uku people desired a vibrant Obi to pilot the affairs of the kingdom, adding that Obi Akaezi I ascension to the throne will further enhance peace, progress and unity in the various communities and subjects of the king.

Emerhor appealed to the new monarch to rule his people with the fear of God just as his ancestors did so as to enjoy the divine favour and blessings of the holy trinity.

APC DELTA will do the needful at state and federal levels from time to time to attract socioeconomic development and provision of dividend of democracy to Ubulu Uku communities and the entire state in consultation with royal fathers in the three senatorial districts, the statement added.