Kunle Afod on The Verge of Commiting 'Suicide' 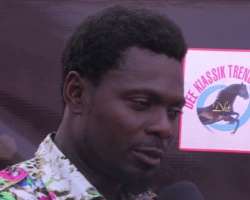 Recently the story of a Nigerian comedian, Ereme, who schools in the UK went viral after he tried to commit suicide.

Everyone showed love and concern trying to stop him from doing it, after he confessed his reasons to be frustration due to the financial challenges he was going through.

While some saw his suicide alert to be publicity stunt, some really believed and reached out to him.

Just for laugh, reminiscing on the incident, actor and producer, Kunle Afod, decided to pull a hilarious one, when he posted a video on his page today saying he would commit suicide today if peopledo not send him money.

Funny right? He went on to say, life is a gift and everyone should learn how to appreciate it.

In his words: " I will commit suicide today, if you guys don't beg and send me money. time starts now.. life is a gift, appreciate it."