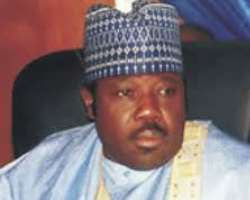 Members of the opposition Peoples Democratic Party (PDP) in the Senate met behind closed doors on Tuesday and agreed to give the new National Chairman of the party, Ali Modu Sheriff up to April, 2016 to leave his seat.

The PDP senators did not grant press interview after the meeting which lasted about two hours but one of them told our correspondent on conditions of anonymity that they also agreed to drop their threat to defect en masse over the issue.

The senator from the South East geopolitical zone, explained that they only gave Sheriff a grace period of two months to conclude his assignments and leave.

He said, 'The meeting was briefed by the leadership of the PDP caucus and it was agreed that the planned mass defection be suspended forthwith. Senators have now agreed to allow the Chairman complete the tenure of the North East as already stated by the PDP Governors Forum.