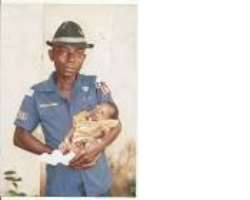 Delta State Police Command under the watch of Usman Baba Alkali is currently battling to save its head from the alleged gruesome murder of a suspect, Ogodobiri Ebifemene, who was till his death, a watchman with the state Ministry of Oil and Gas, was arrested on 17th November, 2015 in connection with a missing laptop in the ministry and was reportedly rushed to the police hospital and subsequently died on 20th of that same month in the police hospital after complaining of headache and later certified dead but was allegedly found hung in the toilet cell’s of “A” Division Police Station, Asaba.

This was contained in a press release made available to journalists by the Command’s image maker, DSP Celestina Kalu four days after the death of the deceased was made known to his uncle, one Mr. Kwalekeme Cletus, and three days after his (deceased) arrest and subsequent detention at ‘A’ Division police station, Asaba.

In a press release by the Public Relations Officer (PPRO) of the Command, Kalu said, “On 20/11/2015 at about 0400hrs, one Ebi Ogodobiri ‘m’ of behind Family Super Market Asaba, detained at ‘A’ Division Police Station Asaba in connection with the offence of office breaking/stealing complained of severe headache. Consequently, he was brought out of the cell and rushed to the Police Hospital Asaba for treatment and was later certified dead”, adding, “the corpse of the deceased has been deposited at FMC Mortuary Asaba for post mortem examination while investigation is ongoing”.

However, when there was heat from the family to carry out an open autopsy on the deceased body, there was a dramatic twist as the police allegedly turned around to state in the coroners laws form that the deceased remains was found hung in the cell’s toilet at ‘A’ Division which contradicts the press release.

In a petition dated 8th February 2016, to the Inspector General of Police, Solomon Arase, by Michael Ororho counsel to the deceased uncle, Mr. Cletus, tagged: “Delta State Police Command Deliberate Efforts To Pervert Justice Over The Unlawful/Extra Judicial Killing Of Mr. Ogodobiri Ebifemene In ‘A’ Division Police Custody, Asaba, Delta State”, the petitioner noted that the family of late Ebifemene Ogodobiri made a long quest for who amongst the police that has hand in the killing of their son if not the IPO and DCO-1 who bluntly denied his bail for four days.

“the late Ebifemene Ogodobiri was a watchman in the ministry of Oil and Gas, Delta State and married with four kids was arrested on 17th of November, 2015 in connection with a missing laptop in the ministry and was killed at “A” Division Police Station Asaba, Delta State on the 20th of November, 2015. It is our brief that our client was informed of the death at about 8:30am of 20th November 2015 by one, Felix, a Police Inspector at the “A” Division and that the late Ebifemene Ogodobiri had headache in the night and was taken to hospital where he died”.

The petitioner said the story was not palatable to his client and he quickly sent a petition to the Commissioner of Police for a full scale investigation into the matter so as to bring the perpetrators to book, “so many steps were taken by the family of our client to enable the Delta State Police Command take the necessary steps to unravel the truth. Among the steps taken was an autopsy conducted on the body of the deceased”.

According to the petition, “our client sensed irregularities from the beginning of the investigation because the Delta State Police Command assigned the matter to the homicide section of the State CID when the O/C one Ngozi Ezebata was same officer who was the DPO “A” Division when the young man was killed in police custody. Our client further informs us that constructive statements were made by some of the officers due to the influence of the O/C homicide and the IPO one Inspector Simon Onwuegbuezie who threatened to deal with any of them who acts contrary”.

The petitioner accused the police that the delay tactics employed by the Command in the whole process and the denial of our client’s family from sighting the cloths of their late son were all attempts to pervert the course of justice, “it is our further brief that the police were highly compromised when suspects connected with the matter were arrested, detained and released when investigations was yet to be concluded”.

The petitioner also expressed worry that the police informed the general public in a press briefing that late Mr. E. Ogodobiri died as a result of “minor headache”. However, the Command turned around and stated that the remains of the deceased was found hung in the cell’s toilet at “A” Division, Asaba, pointing out that, “the autopsy report shows that the hanging as a major cause of the death was stage managed because the features of a typical hanging was not found”.

Also, in his final comments, the lead Pathologist Dr. Ukah Cornelius Ozobia, a consultant pathologist at Nnamdi Azikiwe University Teaching Hospital said, “The deceased was said to be apparently healthy (both physically and mentally) before his incarceration. The deceased body was said to be found hung (a state of suspension) and there is a ligature-like mark (located above the thyroid cartilage prominence) with associated vital reaction, that is bilaterally symmetric and upward slope towards the back of the neck observed at autopsy. These findings are more in keeping with “hanging” as opposed to “ligature strangulation” which is located horizontally and typically below the thyroid cartilage prominence”.

Dr. Ozobia continued: “In “typical hanging”, in addition to the above mentioned features the great horn of the hyoid bone and the superior horn of the thyroid cartilage are frequently fractured because they are pressed against the vertebral body by the force of the ligature. However, these features are not seen in this particular case”.

Meanwhile, some posers to the Inspector General of Police include: who hanged the late Ogodobiri Ebifemene to death? Where was he hanged to death in the “A” Division Asaba? How and why was he moved out of the cell by the IPO (Inspector Simon Onwuegbuezie) on the night he was killed? What was the motive behind the visit of the same IPO (Inspector Simon Onwuegbuezie) to the cell at about 11:30pm and remain there until the pronouncement of the death of the young man by him to the officers at the counter? What is the motive for the delay by the police command in sending the case file to the Director of Public Prosecution for legal advice? What is the reason for the command’s contradictory statements in respect of the death of late Ogodobiri Ebifemene … complain of headache and died on arrival to police clinic and that of deceased remains found hung in the cell’s toilet at “A” Division, Asaba?