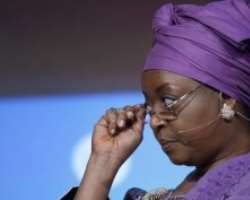 THERE was an indication yesterday that the House of Representatives Adhoc Committee on Crude Oil Swap has formally invited former Minister of Petroleum Resources, Diezani Alison-Madueke, to tell the panel her role in the product swap arrangements with oil marketing companies in the country.

The Guardian learnt that a letter dated February 22 and signed by Chairman of the committee, Zakari Mohammed, has already been sent through the Group Managing Director of Nigerian National Petroleum Corporation (NNPC), asking the former minister to appear before it on March 2.

In the letter made available to newsmen late yesterday, the committee requested Alison-Madueke to appear before it with all relevant documents that will assist the lawmakers during the investigative hearing.

The documents sought by the committee include a full brief on all swap arrangements, a proof of Federal Executive Council (FEC) approval, NNPC board resolution on the contract, evidence of the approval limit of the board as well as that of the Minister of Petroleum and the GMD.

The lawmakers also asked the former minister to bring along any other relevant documents that could assist the committee and the proof to extend a contract that had expired and not yet renewed.

Three former Group Managing Directors of the NNPC had appeared before the committee to explain their different roles during the crude oil swap regime.

It was learnt that during the investigative hearings, sundry breaches were uncovered by members of the committee, including the allegation that some of the companies used were illegal. Guardian