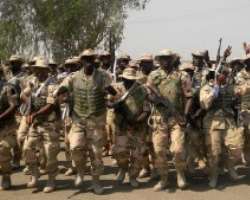 At the time of filing this report, people had deserted the community as shootings raged, leaving scores injured.

It was further gathered that Ndigbara's house was razed and soldiers have taken over the community.

At the time of the soldiers' operation, the ex-militant was not at home, it was learnt.

According to his media aide, Dum Nwine, “nobody knows his whereabouts.” Nwune was around when soldiers stormed the community.

He told Daily Sun at 7:50pm, that early yesterday, his boss had appealed to the public to prevail on government to stop harassing him having been covered by the Presidential Amnesty which he embraced.

Nwine stated: “As I speak, I don't know the whereabouts of my boss. Everybody has deserted the community and many people wounded.”

He called on government to intervene in the matter as people have fled as a result of the shooting and also, heavy presence of armed soldiers.

The shooting, it was further gathered, has spilled over to Bori in Khana Local Government area, as irate youths have burnt down the campaign office of Senator Magnus Abe, candidate of the All Progressives Congress (APC), whom they accused, with another member of the party, of masterminding the raids by soldiers.

Soldiers had earlier this year carried out similar operations at Ndigbara's residences in Yeghe and Port Harcourt.