Sheriff is not fit and proper person to lead PDP, BOT insists 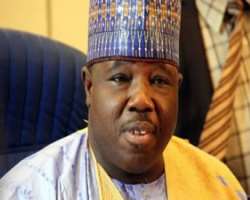 Members of the Board of Trustees  of the Peoples Democratic Party (PDP)have remained adamant on their position on the appointment of Ali Modu Sheriff as the Chairman of the party, saying that h must resign.

Jibrin, who spoke  behalf of the trustees, said that as the conscience of the PDP, the BoT was in the best position to know the right candidate for the job, insisting that the Sheriff was not the right man to lead the party at this auspicious time in the life of the party.

According to him, the trustees are consulting with other organs of the party on easing out Sheriff.

“We are going to propose viable solution to this problem after we must have consulted with other organs and relevant stakeholders in the party,” Jibrin said. He declined further comments.

But Sheriff remained  conciliatory and he implored on his opponents to forgive him, even as he has officially resumed in the office of the chairman of the party.

Speaking at the party secretariat shortly after he officially took over the leadership, the former governor of Borno State said that people should banish the thought of him resigning.

While promising to initiate re-conciliatory moves, Sheriff made it clear that he has the mandate of the leadership of the party.

“I won't resign because the leadership of the party, in their wisdom, chose me to lead the PDP for the purpose of rebuilding and repositioning the party at this critical period,” Sheriff said.

“I will leave no stone unturned. I will go to everybody for support. I will bring everybody on board. Let those who were not consulted before I was appointed forgive all of us for whatever wrongs have been made.

“Let us put our differences behind us so that we can overcome our challenges and rebuild the party together. If all stakeholders agree to build the party, PDP will become the biggest party in Nigeria again.”

Sheriff called on  the aggrieved parties should explore internal mechanisms to resolve the differences, saying that he was aware that their grievances were borne out of their genuine love for the party,  adding however that going to the media with their grievances would not solve the problem.

He promised to initiate discussions with chieftains of the party who defected to other parties before the 2015 general elections, with the view to wooing them back to PDP.

The former governor however  dismissed reports linking him to the Boko Haram terror group, insisting he never sponsored the sect. He said, “Boko Haram killed my own brother. They killed members of my family. So, why should I sponsor people to kill my own brother, my own family? I am not a fanatic. I love to enjoy my life.

“Boko Haram are criminals who live in the bush and eat once a day. I believe their sponsors will be caught at the end of the day. I have nothing to do with Boko Haram,” Sheriff said.

He singled out a former Aviation Minister, Chief Femi Fani-Kayode among the people linking him with the terror sect, saying “this time around, people like Fani-Kayode will not go scot-free”.

“How can a person that got only one vote ask me to resign. Where is credibility; where is justice? If he did not contest the position with me, maybe I would have listened to him,” he said.