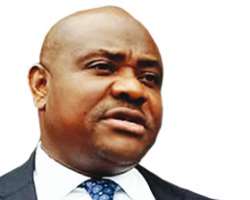 The governor announced the suspension at Omoku, headquarters of Ogba/Egbema/Ndoni council area of the state.

He listed the affected chairmen to include those of Abua/Odual, Ahoada West and Ahoada East council areas.

It would be recalled that the governor had scheduled a town hall meeting following recent cult clashes, killings and a near breakdown of law and order in the Orashi region of the state.

The Orashi region is made up of four area councils of Ogba/Egbema/Ndoni, Abua/Odual, Ahoada West and Ahoada East.

The governor said that the chairmen's failure to attend the meeting showed that they were insensitive to the current issues of violence and crime that had recently enveloped the areas.

Wike used the forum to urge security agencies to clampdown on cult activities and all forms of crimes in the four local government areas.

He said the meeting was to enable government to empathise with the communities affected by the state of insecurity that had engulfed the area.

'It is our duty to protect the lives and property of our people; I must tell you that we are also prepared to do so.

'We have directed security agencies to do the needful to ensure that calm returns to the affected communities,'' he added.