Is Yoweri Museveni An African Political Thug Or A Democratic Realist? 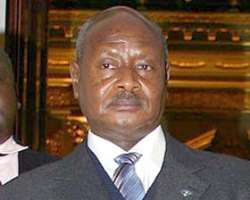 Observing the 2016 general elections in Uganda brings to the surface a strong controversy between political science and governance as social practices. The contest that was between Museveni and the two veteran opposition politicians, Besigye and Mbabazi has been concluded with violence and strong possibilites of future violence, inspite of the fact that it has left Museven as the winner to his now seventh term as the president of Uganda or his 31st year as the president of Uganda.

This has happened on the backdrop of age-long heavy poverty,abuse of human rights,joblessness and despair, tormentingfear,squalorism , shameful diseases like leperosy, punctured education system, palpable police brutality and hostility,corruption,brotherism,oppression of the press and rights to freedom of the speech as well as irritating cutlure of political falstaffity by president Museven as a day to day experience of the people of Uganda.What I mean is observing politics in Uganda will lead you to nothing else but to a conclusion that democracy is a beautiful paralysis of human hope beyond any diagnosis known to mankind today and tomorrow.

To be concise Museveni might have won the presidential elections or maybe he has not won, that is not the problem, the issue is how museven monkey-wrenched the entire electoral process by using police and millitary brutality to destroy all the fairness in the election process.Those that watched or saw Museven using millitary power to terrorize and humiliate his key opponent Dr Khisa Besigye will be activated mentally to remember the former millitary dictators that extremely employed Armies in police uniforms to mayhem the unarmed civilians , I mean to remember the likes of San Abacha of Nigeria,Moi of Kenya and Idi Amin Dada of Uganda.

In contrast to the tempo of the moment where the world society emotionally contrites with the people of Uganda, political scientists are observing different lessons from the experience.In theory of politics and power management , Museven is a perfect example of political realism.Political thinkers in the school of realism like Thomas Hobbes,Niccollo Machiavelli and Dr. Spengler would readily find a role model in the person of Yoweri Museven as a paragon of politics and its practice. Violence is one of the means you use to capture power and maintain power, given the available convenience in practice of politics that the end justifies the means.Intellectual power,religious power and soft power like the ones used by Museven’s opponent are also tools of achieving and maintaining political power, but ufortunately they are not effective enough as actions plans for the achievement of the goal of contested political power.Mbabazi and Besigye needed stronger economic power and physical tyranny to counter Museven.In this situation therefore a keen political scientist would find most of those opposed to Museven to be suffering from a vice whose syndrome is basicallypolitical illiteracy and political callousness of a sorriest order.

Some few days to the election date Museveni launched one of his books, Sowing the Mustard Seed, as part of his campaign strategies.This is not a new book,he wrote it ten years ago as essays explaininging the ideology that can bring political stability in Uganda.The book is nothing else other than defective application of Marxist ideology to justfy selfish socialism which Karl Marx himself described as prosaic socialism of the Blanguist school.It is the same literary position Musevensuffered in another book ,Museven’s Long Match, obviously borrowed from Mao Tse Tung use of language in the Selected Works.Both books show Museven as a self-congratulatory intellectual with poor academic background trying to hide his illiteracy behind ideological miracles, the same way Malcolm X and Adolf Hitler did through their stunning auto-biographies.

The techinical truth is that Museveni is only applying Machivellian tactics by dissembling,scaring and intimidating the people of Uganda into subjection to his oppressive political power.However in practice , Museveni does not have the millitary muscle now to counter an insurrection in Uganda if it occured today.He will be ejected out of power in the style of the north African springs that saw Gaddafi and Mubarak out of power.

The opportunity is that Museveni has concentrated the army jobs to his brothers from Banyonkole clan in Mbarara district,he has left out the majority from Gishu,Baganda and Ateso to wallow in the mire of poverty and economic estrangement. He has economically and intellectually paralized the Luos from Northern Uganda where Okot P’ Bitek was born, by funding Joseph Kone to perpatrate state terrorism there on this Luo communities. Thus the Uganda Army is the most detested army by the civilians of all of the armies in East Africa.

The fact is that Museven has over-applied political realism untill now it looks like political thuggery.It is not logical inthe post modern world to use the brute of the gun so that you hang on a rotten throne of oligarchical juntaism for over thirty years without any reason for the same, only that you are preparing your son to be your successor.Such unconstitutional reign or even sometimes such constitutional tyranny invites nothing but a justification of armed violence by the oppressed people as they would betired of begging for freedom from a political megalomaniac who doesn not have ears to listen to the out-cry of the people but instead he puts on deliberate blinkers to the politcal opensore gangerenously eating into social and economic flesh of the same people.