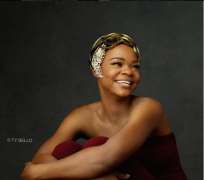 About three weeks ago, 27-year old Olajumoke Orisaguna was a complete unknown on the streets of Lagos, hawking bread. A loaf of bread is about N100, and even with a full tray such as she carried in her first public embrace of fame, her whole ware for a day may not be more than N3,000, with daily profit between N300-N700. She had trained as a hair stylist, got married but had to leave her husband and a daughter back home in Ire, Osun state, to “hustle” as it were in Lagos. The life of a bread seller in Lagos is easily imaginable: exposure to the elements, to sundry abuse, including the possibility of being raped by unruly artisans and bachelors, who will offer to buy bread and something else along with it, if the hawker is willing. This was Olajumoke Orisaguna's reality until she ran into TY Bello and Tinie Tempah and her life changed. Today, she has been enrolled as a model. Her story has appeared in all newspapers, on CNN, Huffington Post, and virtually everywhere online.

Two companies: StanbicIBTC and PayPorte have made her their brand ambassador. The former even awarded her two daughters scholarships up to university level. Her face has appeared on the cover of magazines. She is now a student at Poise Finishing School, an intern with two beauty salons, and a motivational speaker, even if she reportedly can't speak English. When she went to the office of the National Identity Management Commission to get an identity card, NIMC also cashed in on her new found fame to use her to promote the agency: “Olajumoke knows she needs to NIMC. She walked into a NIMC centre yesterday unsolicited. Olajumoke is smart. Be like her.” This must be the most saccharine endorsement of Olajumoke so far.

To crown it all, a construction company has given her a luxury apartment in Lagos. From hawking bread in Agege, she is now within weeks, the darling of corporate Nigeria, the poster girl for corporate social responsibility, a landlady, and a role model. She had probably never seen the inside of an aircraft, but a few days ago, she was on a flight to Abuja to give a speech!

Mrs Orisaguna is Nigeria's Cinderella. Hers is a sudden, unplanned, unexpected, unprepared for grass to grace, rags to riches story, a kind of I–just-dey-waka-my-own-jeje-luck-come-jam-me-tale. It doesn't happen everyday. It is the kind of accident that many Nigerians seek: accidental fame and fortune. It is perhaps the magical, miraculous, I-don't believe-it-but-it-is-true quality of this story that has captured the public imagination.

Olajumoke was hawking her bread innocently in Sabo, when she stumbled upon a photo session by that gifted mother of twins, artist and photographer, TY Bello, working on a series of shots for the international hip hop star, Tinie Tempah. We have been told that Olajumoke Orisaguna “photobombed” herself into the activity. I guess she just happened to walk by trying to sell bread, and TY Bello who is a spirit in action when she is at work, had a brain wave and took her picture. Enormously creative, T Y Bello thinks on her feet. When she has that her big camera in her hands, she is an agile, inventive artist.

Her camera is a weapon for interpreting space and reality, and for discovering new meanings. It must have occurred to her that asking the international musician to pose with a bread seller would give the picture a much deeper meaning, inherent in the open contrasts and auto-suggestions. It is that split second decision that has turned Jumoke Orisaguna into a superstar. The shot was brilliant, the result was impressive with people asking: “Who is that girl? She will make a good model.” TY Bello took on the challenge, and became Olajumoke Orisaguna's promoter, mentor, adviser, godmother, and supporter, taking her to new heights within three weeks. Nobody is talking about Tempah, the main subject of the photo shoot; the focus is on the wanderer who walked onto the set, the bread seller who has taken the bread of the show, the waka-pass who became the star. I understand Tempah is quite happy; don't be surprised then if he composes a special song soon, titled “The Bread Seller!” or “Photobombed” or simply “Olajumoke.”

The Olajumoke Orisaguna story is a perfect demonstration of the witchcraft quality of photography and that single shot that has changed a life may well be one of TY Bello's most remarkable efforts in her chosen genre. But I find around Olajumoke's sudden transformation from person to brand, too much capitalist hypocrisy and opportunism. The brand is selling like hot cake, but the person needs protection. I feel for her. I fear for her. There is a sense in which she is a potential victim. The brand experts now taking her from place to place probably would not have even patronized her. They don't eat the kind of bread that she sold.

Many of them don't even know what part of Lagos is called Sabo. They don't buy their bread from hawkers; they would rather go to supermarkets or confectionery stores. Before luck smiled on this young lady, many of those now posing for photos with her would never have noticed her presence. There are definitely many of her type, still hawking bread, or some other items, some even sitting in front of the bank, with a baby strapped to the back, but they may never be noticed or helped. The same companies that are using Olajumoke to talk about corporate social responsibility, are actually joking, they know that this is not CSR; it is brand exploitation!

And it may not last. There is nothing in Olajumoke's background or exposure that has prepared her for the life of glitz being imposed on her. The skills she has acquired as a bread seller and hair stylist may not carry her far in the cruel world of modeling. When this blitz is over, she will need to compete for jobs and attention, if she must remain a model. She will have to learn sooner or later, to survive on her own. She will have to maintain the luxury apartment that she has been given. She has been taught fancy dressing, including the magic of make up and those magical colours that change a dull face into a phallus-teasing one do not come cheap.

She is at best an art work that other people have created: she has been made up into a siren, her hitherto dull skin now glows, in one photo, her hair had a queenly allure, they have given her new clothes, jazzing her up, to look feminine and sensual, and they have taught her how to smile in a tempting manner. Wow. That smile! The sorry part of it all is that her narrative is quite innocent and hauntingly brief, as is the case with all overnight sensations. The capitalist hypocrites will soon find something else to excite them, just as the media will find a new story. It probably would have been much better to help Olajumoke Orisaguna set up a small-scale business, to take her off the street-life of hawking, rather than this world of sharks into which she has been thrown. Perhaps the best that has been done for her is sending her on internship at beauty salons. She could at least set up a beauty salon of her own and live happily thereafter.

In a normal society, no young woman should be on the streets hawking bread in order to survive. In a normal society, Olajumoke Orisaguna would have been given the opportunity to go to school, and have a proper career. She is being given, all within three weeks, the kind of empowerment that society has denied her and many like her, but how about all the other Olajumokes who may never “photobomb” their way to luck? Her new life is a reminder of what she could have been but which she could not become because of the kind of society in which she has found herself. She should never have had to hawk bread to support her husband and children.

Her husband! Yes, Mr. Sunday Orisaguna. I have seen him in the photographs, either carrying their baby, or just putting up appearance. He looks lost, confused, overwhelmed, harassed and uncertain. He must be wondering what has happened or is happening to the woman he married. There is a clear difference between Olajumoke, the wife and bread seller, and Olajumoke, the model and celebrity. While Olajumoke is beginning to wear designer clothes, her humble husband is still managing his one-day-me-too-go-jam-luck attires. His wife has been sent to finishing school. By the time she finishes, I hope her new persona will not finish her marriage.

Olajumoke is now learning to speak English, but her husband is a humble, sliding door installer who probably speaks only Yoruba. In our kind of society, given the social level and cultural background of the parties involved, it won't be long before the demons will begin to crawl out of the woods, from in-laws who may begin to psycho-analyse Olajumoke, to family members who will scrutinize her every gesture, and friends with whom she hawked bread and has now left behind.

Lack of clarity over role interpretation and the new persona could also confuse the young mother. She needs a different set of skills to manage new relationships, especially the new friends coming her way, including those lecherous uncles who may show up and seek to exploit her innocence. The people turning her into a sex symbol should also tarry a while, and remember that she is a married mother of two. She needs counseling. And her sliding door installer husband, who has featured in her fairytale so far as a hanger-on, no matter what happens, should not be made to slide away. Sunday Orisaguna should also be counseled, given new clothes, taught English and sent to finishing school. He should not be left behind.