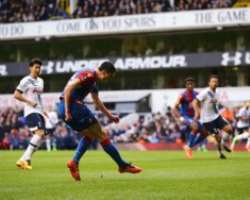 Martin Kelly ‘s powerful strike sealed a 1-0 win for Crystal Palace against Tottenham Hotspur in the fifth round of the FA Cup on Sunday.

Palace took the lead just before the interval at White Hart Lane, when Kelly thumped a shot into the top corner after dazzling skill from winger Wilfried Zaha .

Dele Alli almost put the home team ahead in the opening moments but Yohan Cabaye blocked his goal-bound header on the line and Alli later came within inches of scoring when his shot hit both posts.

Palace, who have never won the FA Cup, progress to the quarter-finals after beating Premier League opposition for the third successive round, having previously knocked out Southampton and Stoke City .

Spurs manager Mauricio Pochettino made seven changes from the side that drew 1-1 against Fiorentina in the Europa League on Thursday, with Joshua Onomah and Nabil Bentaleb handed starts.

Alli almost gave Tottenham a dream start in the third minute but his diving header was cleared off the line by Cabaye, with Onomah putting the rebound over the crossbar.

Palace appealed for a penalty after five minutes when a Jordon Mutch cross bounced off Nabil Bentaleb’s chest on to his arm, but referee Craig Pawson was unmoved.

Michel Vorm then had to scramble Kyle Walker ‘s misjudged header off the line before Harry Kane ‘s volley deflected off Damien Delaney and wide of the post.

The hosts came within inches of taking the lead after 22 minutes when Son Heung-min danced into the box. Alli collected the loose ball and placed a shot across Wayne Hennessey , but the strike hit the post and rolled along the line to strike the woodwork again.

Hennessey kept out Kane’s 25-yard curling free-kick after 41 minutes and the visitors then took the lead against the run of play on the stroke of half-time.

Superb play from Zaha created an opening for Kelly and the right-back thundered a powerful strike into the top corner, leaving Vorm helpless at his near post.

A battle between Kane and Hennessey was developing, with the Palace goalkeeping coming out on top again after 50 minutes, the Wales international making a fingertip save to turn the striker’s shot wide.

Kelly blocked Onomah’s effort on the line and Hennessey saved from substitute Christian Eriksen after 62 minutes as Pochettino’s men pushed for an equaliser.

With six minutes to go, Scott Dann blocked Onomah’s shot, before Palace had a second goal correctly ruled out for offside when Connor Wickham turned in Bolasie’s cross.

Palace were without a win in their last nine league matches but Pardew’s side held on to defy the form book and pull off an impressive cup victory.

Key Opta Stats
- Martin Kelly scored his first goal since scoring for Liverpool at Chelsea in November 2011 (1545 days ago).

- Kelly is the fourth Palace defender to score in all competitions this season, along with Scott Dann, Damien Delaney and Joel Ward .

- Palace have won their last four away FA Cup games after winning just four of their previous 16 before that.

- Spurs failed to score in a home FA Cup tie for the first time since March 2002, a 4-0 quarter-final defeat to Chelsea.

- Palace have reached the quarter-final for only the sixth time in their history and for the first time since 1994/95. 18 year old Joshua Onomah who is of Nigerian parents has extended his stay with English premiership giants Tottenham Hotspurs till the summer of 2019.

Onomah was handed his senior Spurs debut last season against Burnley in the FA Cup by manager Mauricio Pochettino.

The Spurs boss then took Onomah on the club’s post-season tour of Malaysia and Australia, with the midfielder featuring in both the club’s matches.

A regular for Tottenham’s Under-21 side, Onomah made 16 appearances in the Under-21 Premier League last term and captained the side which reached the semi-final of the FA Youth Cup.

And in Pochettino he appears to have a firm fan after being handed a long-term deal.

Onomah has represented England at Under-16, Under-17 and Under-18 level.