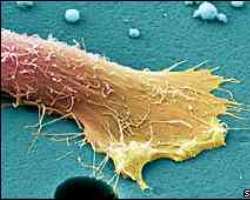 It is not clear whether these differences affect survival rates

Men living in deprived areas are less likely to receive radiotherapy or surgery for prostate cancer than their richer counterparts, a study suggests.

Writing in the British Medical Journal, researchers who studied 35,000 men described “substantial” differences between what rich and poor received.

They said it was unclear what impact this could have on survival.

But previous studies have suggested a gap as high as 7% in survival rates between the least and most deprived.

If the cancer is localised and deemed low risk, most men are regularly monitored, but if it has started to develop doctors offer surgery or radiotherapy.

The Cambridge University team noted that the use of surgery more than doubled between 1995 and 2006. But their study showed it was more likely to be taken up by the most affluent – with 8.4% of this group receiving treatment to remove the prostate gland compared with 4% of the worst-off patients.

With radiotherapy, nearly 29% of the wealthiest received this form of treatment, compared with 21% of the poorest.

The pattern of discrepancies continued even when age, stage of the disease and hospital were taken into account.

Dr Sarah Cant
Prostate Cancer Charity
Incidence has been rising among the wealthiest groups, but this is thought to be down to the more affluent being more likely to take up testing – which at present is not routinely offered on the NHS.

The study authors noted that there may be a number of reasons why they observed these patterns in treatment, including differences in the interactions between patient and doctor or the risks different patients with varying educational backgrounds were prepared to take with their treatment.

While discrepancies between survival rates have been recorded, a wealthier patient who opts for surgery on a low risk tumour may not gain much advantage over a poorer patient with the disease at a similar stage who is merely monitored.

“Given these uncertainties, the observed differences cannot be assumed to indicate differences in treatment quality,” said Georgios Lyratzopoulos, who led the research.

Dr Sarah Cant of the Prostate Cancer Charity said it was “vital that further research is carried out to explore the reasons behind these results”.

But she added that, since 2006, measures have been put in place to ensure that anyone diagnosed with cancer is given clear information about the treatment options open to them.