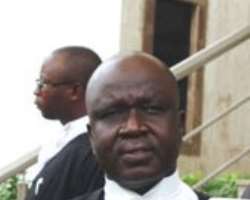 Socio-Economic Rights and Accountability Project (SERAP) has sent a petition to Ms. Monica Pinto UN Special Rapporteur on the independence of judges and lawyers requesting her to “use your good offices and position to urgently prevail on the National Judicial Council (NJC) to suspend the judge involved in the alleged receipt of N225, 000 bribe.”

It would be recalled that Rickey Tarfa, a senior Nigerian lawyer, allegedly made phone contacts with Justice Mohammed Yunusa in a case before the judge. The Economic and Financial Crimes Commission (EFCC) alleged that Mr. Tarfa’s law firm, Rickey Tarfa & Co. paid N225, 000 into Justice Yunusa’s bank account.

The group also asked Ms Pinto to prevail on “the Nigerian Bar Association (NBA) to ask the Legal Practitioners Disciplinary Committee (LPDC) to suspend Rickey Tarfa, the lawyer involved in the alleged payment of N225, 000 bribe in Nigeria, pending the completion of any investigation and/or final determination of any trial on the matter.”

The petition dated 19 February 2016 was signed by SERAP executive director Adetokunbo Mumuni. The petition reads in part: “SERAP is concerned that despite these serious allegations of bribery and corruption, the National Judicial Council has failed and/or refused to suspend the judge involved pending any investigation and/or trial of the judge. Similarly, the Nigerian Bar Association has failed and/or refused to ask the Legal Practitioners Disciplinary Committee to suspend the senior lawyer involved pending the final determination of the case against him.”

“SERAP is concerned that the allegations of bribery and corruption such as the alleged payment and receipt of N225, 000 threaten the very essence of the independence of the judiciary and the actors in the legal profession.”

“Such allegations also severely undermine the rule of law, the public’s confidence in the judiciary, raise the cost for judicial services because litigation is driven by corruption instead of by the legal process, discourage people from resorting to the formal justice system, and ultimately victimise the most disadvantaged sectors of the population who do not have the means to play by the informal rules set by a corrupt system.”

“The allegations also undermine fair competition and economic growth, as there is a clear correlation between the level of economic activity in a country and an effective judiciary combating corruption.”

“SERAP believes that the NJC and the NBA are in the best position to tackle judicial corruption and corruption within the legal profession, and to ensure the application of appropriate disciplinary measures in cases of bribery and corruption such as the alleged N225, 000 bribe highlighted above.”

“Indeed, both the NJC and the NBA have clear responsibilities to counter and combat all manifestations of judicial corruption and corruption within the legal profession. Therefore, the continuing failure by the NJC to suspend the judge involved, and the NBA to ask the LPDC to suspend the lawyer involved will continue to allow judicial corruption to grow, undermine the efforts of all other institutions of governance, and can lead to impunity.”

“SERAP notes that article 14 of the International Covenant on Civil and Political Rights recognizes the principle of equality of all persons before courts and tribunals and the guarantee of a competent, independent and impartial tribunal established by law. However, the enjoyment of the right to a fair, effective and efficient administration of justice is impossible if the judiciary and the legal profession cannot act with integrity.”

SERAP therefore urged Ms Pinto to prevail on both the NJC and the NBA to:

1. Exercise their mandates to deal fairly with any suspicion or evidence of acts of corruption;

2. Take measures to strengthen integrity the bench and the bar, and to prevent opportunities for corruption among members of the judiciary;

3. Fully and effectively enforce the codes of conduct correct, honourable and proper performance of judges and lawyers;

5. Place the independence of judges and lawyers at the centre of their policies aimed at preventing and combating corruption and strengthening the rule of law and human rights;

6. Contribute to strengthening safeguards for the independence of the judicial system and safeguards against judicial corruption in order to ensure the accountability of judges and lawyers;

7. Encourage judges and lawyers to discharge their functions with integrity and impartiality and preserve the dignity of their profession;

8. Recognize that the requirement of independence and impartiality of the judicial and legal professions does not exist for the benefit of the members of the profession themselves, but rather for the users of the justice system, as part of their inalienable right to a fair trial.