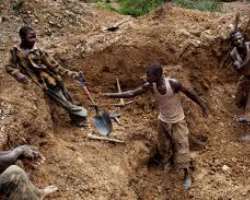 The Kano State government says it would engage the illegal miners in the state to explore the available mineral resources it has and identify those in commercial quantity.

The Special Assistant to Kano State governor on Mines and Steel, Alhaji Umar Ladiyo Ibrahim made this known at a briefing, saying the illegal miners would not be arrested or intimidated, but would be organized to operate formally.

We shall partner with the illegal miners so that they could guide us where to locate the mineral resources available in a particular area and to be able to identify those available in commercial quantity, he said.

Ibrahim added that government would organize the illegal miners into cooperative which would be duly registered so that they could go about their work in a formal and legal way.

He further explained that soon government would embark on sensitization campaigns to encourage the business community to explore the sector with a view to establishing companies for mining and to woo foreign investors who would tap the available natural resources.