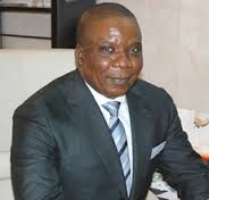 INQUEST into shady deals in the oil and gas sector is proceeding apace with the arrest and detention of some players in the sector.

Acting Chairman of the Economic and Financial Crimes Commission, EFCC, Mr. Ibrahim Magu, disclosed, yesterday, that Mr. Olajide Omokore has been arrested and has been in the agency’s custody in the last three days.

Omokore, who was quizzed by the EFCC last year but later released, is Chairman of Atlantic Energy Drilling Concepts Nigeria Limited and a director in Seven Energy International Limited.

Atlantic Energy was one of the greatest beneficiaries of controversial approvals made by former Minister of Petroleum Resources, Mrs. Diezani Allison-Madueke, under the former President Goodluck Jonathan’s administration.

Magu disclosed Omokore’s detention, yesterday, during a courtesy visit to Vanguard’s head office in Lagos. He also vowed to prosecute the war against graft to the letter, even if it meant laying down his life.

This came as the Nigerian Bar Association, NBA, cautioned the Federal Government against abusing provisions of the constitution in the name of anti-corruption war, claiming that the government was doing more of persecution than prosecution.

Countering allegations that his commission was selective in prosecuting the anti-corruption war, the EFCC boss said: “People have the right to say that we are selective. But any minister or government official that is accused of corruption will be investigated. We will invite the person to our office. We are already investigating the NNPC. Even now Omokore is back in cell. I don’t know how he managed the publicity, he has been in cell for three days.”

“Magu vowed to be “total, holistic and unsparing”, in his approach to tackling corrupt practices.

How senior lawyers are frustrating the war
He also fumed that efforts at recovering stolen public funds and prosecuting alleged looters were being frustrated by 133 senior lawyers, describing such as a conspiracy against the commission.

According to him, some external lawyers, who are working for the EFCC are also working against the commission, adding that for the anti-graft war to yield desired results, the commission must be supported by every one.

“I know that in every sphere of life, we have the good, the bad and the ugly. I am not saying we don’t have bad ones among us in the EFCC. I have realized that people are fighting us both from within and outside. But we need to be committed to whatever we are doing; I am not saying that we are correct all the time. I am not averse to criticism. I always welcome criticisms; when you look back it will help the system. I am saying that people have money.

“Now, we have a gang that is really fighting us. We have a gang of about 133 lawyers that are fighting back in the system. They are fighting everybody. If care is not taken, this fight will turn into a fight between the haves and have-nots, which is why I want everybody to support us. Most of these senior lawyers don’t care. If you don’t have money, they can’t take your brief. They use the proceeds of corruption to do their business. Otherwise why should someone carry 34 SANs to court? What sense does it make? And then you discover that only one stands before the judge. They are going for the money. This story is real. If you don’t have money, they won’t work for you.

“What I am saying is that Nigerians should join us in the fight because corruption is fighting back. I don’t care, I am ready to fight to finish, because if there is any reason, it is an honour that when I die, people will say that Magu died fighting corruption. If there is any other cause that I prefer, I prefer to die fighting corruption. That is why we are seeking for support so that we will be on the same page especially now that it is fighting back. We are fighting for a better Nigeria so that our children and grand children will have a better Nigeria because many of us were lucky when we were in the university. That opportunity does not exist again but we have a chance.

“If things can be done properly you will see the changes. These changes that the President is trying to do in the budget office, for instance, if things are properly done, I think we will not be talking about oil money.

If we can recover this stolen wealth, we will do well. So, if things can be done properly there is no reason for Nigeria not to be good. That is why I have come to seek support not for me but for the nation. We do things with the fear of God, we do things within the rule of law.

But first with the fear of God, national interest and the rule of law. I know we are all human beings, I am not claiming any perfection that is why I need the support of everybody to do this because it is a total war. If you can have a gang of 133 SANs trying to fight back, it is very clear that they are fighting back. Let us fight them to finish. In any case, at the end of the day, the people will win, we will take the day so that our children will laugh.”

On recovered loot
Magu, who could not disclose how much the commission has recovered because the issues are still in court, said the EFCC has no business with how the recovered loot is expended.

“Our own is to recover. The cases are in court. Sometimes it is the court rulings that will say what to do with the proceeds of the crime. So we follow strictly the dictates of the court order. Sometimes, the judge may decide and ask you to give the money back to the victim. It is not like we collect money and give it to any government.

It has to go through the process and at the end of the day, whatever the court says, is what we will do. The Tafa Balogun money was given to the Federal Government; there was a specific court order that (late DSP) Alamieyeseigha’s money should be given to the Bayelsa State Government. There is a committee on verification of recovered assets.”

On perceived lopsided nature of the war
Dismissing the perception that the commission’s anti-graft campaign has political undertones, Magu said that no one is being witch-hunted, adding that the EFCC has evidence to substantiate all its prosecutions.

“All the people we are investigating were in public positions, there was looting. They have stolen public wealth. It is very real, nobody is faking anything. We don’t cook stories, there is evidence. If they are not involved, nobody will invite them. So it is not political, it is about Nigeria.

They use some big lawyers to frustrate the proceedings in the courts. EFCC does not start arresting when someone brings complain, we have to commence preliminary investigations. We might be working on a case for six months before we invite that person and confront him with the petition. We conduct prolonged investigations before inviting anyone. We invited Alison Madueke’s husband, do you know how long we investigated him before inviting him? We want to be corrected and are willing to be supervised because this thing is about Nigeria,” he added.

NBA tasks FG on rule of law
Meanwhile, President of the Nigerian Bar Association, NBA, Augustine Alegeh, SAN, has tasked the Federal Government to uphold rule of law in the fight against corruption. According to him, doing otherwise will mean that the suspects are being persecuted instead of prosecuted.

Speaking in Jos, yesterday, at the National Executive Committee, NEC, meeting of the NBA, he canvassed sanctions against members who committed critical failures that could have been avoided at the various elections petitions tribunals in the country.

Olajide Omokore, a synopsis
Olajide Omokore is known to have been playing entrepreneurial roles in key sectors of the Nigerian economy since 2010. He is involved in the upstream and downstream activities of Nigeria’s oil and gas industry with companies, which he either founded or in which he has stakes. He is the chairman and founder of Energy Resources Group.

He is also the Chairman of Atlantic Energy Drilling Concepts Nigeria Limited, and a director in Seven Energy International Limited. The Yagba, Kogi State-born business man is not new to controversy, as companies owned or directed by him have been involved in one controversy or the other.