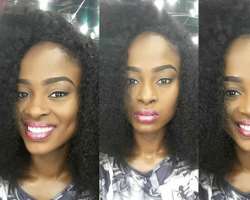 Some Nigerians fail to understand that we are Africans, with cultural values and believe. Imitating the whites should be limited due to the fact that our cultures varies.

A certain set of people believe nudity is an art, if true, which parent would pat his/ her child on the back for going nude?

Our cultures do not permit such, as it tends to question our upbringing.

While many fast rising actress sees this as a quick means to get to the top, they also forget, it might turn around to be their greatest regret years later.