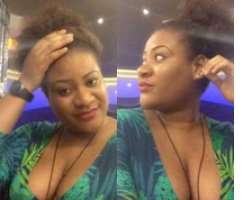 Yoruba actress, Nkechi Blessing Sunday better known as Omoge Lekki, in a recent interview monitored by Nollywoodgists.com has disclosed that she was welcomed more in the Yoruba movie industry than in the English industry.

According to her, in the English movie sector, they know that someone can act but they will want to subject the person to a minor role so that the fellow will not be known.

She stated that her first movie was an English movie but as time went on, she observed that she was well accepted in Yoruba than in English which was why she made the switch to Yoruba movies.

In her words, “English movies are more tedious compared to Yoruba. I did not get a good welcome in the English sector. In English movie they know you can act but they will just give you role that will not push you out but in Yoruba they are good to everyone especially none indigenes.”