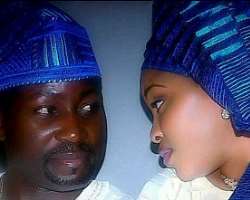 Yoruba actress, Mosunmola Filani Oduoye and her hubby, Kayode Oduoye are elated as they have been able to scale through the storms of marriage for four years now and still waxing strong.

Marriage seems to be sweet and she has been enjoying every bit of it by the days as she is seen going around with her husband to attend political functions.

The light skinned beauty has been seems to have slowed down in her acting career and has is rarely at movie locations unlike when she was still single.

In her words, “4 Years down, forever to go, happy wedding anniversary to us.”

The Ibadan-based actress who is very popular in the industry has had a celebrated romance with Kayode, CEO, Shalom Kay Productions over the years, but both kept the hush hush romance under wrap even though it was said to have caused a lot of controversy for the actress, especially since the dark skinned guy already has 2 wives, some even say 3.