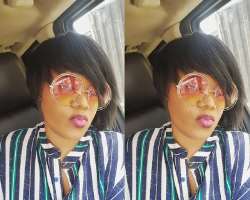 Few hours ago, social media went wild with the claims that sultry Nollywood actress, Toyin Aimakhu was kidnapped by her new man, Seun Egbegbe, and her phones siezed.Friends and colleages of the actress where panicking and keep searching and calling her phones, which were reportedly picked by a man (Seun Egbegbe).Giving his own account of the story, Seun took to his Instagram page and posted  what happened.According to him, Toyin is his house wife but crushing on another man on Instagram."Lol this is funny I don't do this but I really think Is needed because  i need to clear my hand off what I was wrongly accused of. Is it possible for a man to kidnap his woman living in his house as house wife? if I kidnap her who will pay the ransom asked by the kidnappers. I am in my house when I read a post on Instagram that I kidnap my wife @aimakhutoyin. Let just give a clue of what happen . I was at home in my living room this morning when my friends and family called me about toyin post on Instagram that she post another man as her crush and crying about the man on her page. Your husband doing everything you want for you that is what is called adultry. She left from my house this morning to kemi Korede movie shooting so I was angry and I went to the movie location I took her phone from her because I don't want a slap on my face anymore. I guess taking that step is not too much me. How can I kiddnap a woman with my car of millions of naira. I won't say more than dia but I know very soon the truth will be out soon but the comedy I love about the all story is that she said I kiddnap her phone she kiddnap my rangerover jeep" he wrote.Like Mr. Egbegbe said, all Toyin's fans are eagerly waiting to hear the full story or at least Toyin's angle to the drama.?