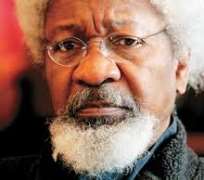 Nobel Laureate Wole Soyinka has blamed the current economic situation in the country on years of bad governance, and urged the federal government to call an emergency economic conference to address the situation.

Prof. Soyinka, who spoke during a courtesy visit to the Minister of Information and Culture, Alhaji Lai Mohammed, in his office in Abuja on Thursday , also reiterated his earlier support for the Administration’s fight against corruption

”The economic condition of a nation, of a people does not deteriotate overnight. Something came before that deterioration,” he said, while answering a question on the current state of the nation’s economy.

He blamed the deterioration of the economy on ”a certain prolonged and unchecked process of attrition”, adding that Nigerians should not expect a quick turnaround of the economy.

”Recovery is going to take quite a while…The President should call an emergency economic conference, with experts to be invited. Consumers, producers, labour unions, university experts, professors, etc.

”I think we really need an emergency economic conference, a rescue operation bringing as many heads as possible together to plot the way forward,” the Nobel Laureate said.

Prof. Soyinka said the government must remain resolute in its ongoing fight against corruption, while also expressing satisfaction with ”both the target and tempo of motion” as far as the government’s efforts are concerned.

He urged the government to pursue the anti-corruption battle within the confines of the law, saying that if that goal (of fighting corruption) is attained by positive means, if nothing else, the government would have moved the nation forward by many years

According to him, the government must recover stolen funds and punish those who are responsible ”for the improverishment of the nation, of the people and those who robbed the nation with contempt”.

Earlier, while welcoming Prof. Soyinka, the Minister said it was a great pleasure to host the Nobel Laureate whom, he said, had come on a private visit.

He however said that with his level of fame and accomplishments, it was practically impossible for Prof. Soyinka to go anywhere unnoticed.

Alhaji Mohammed thanked Prof. Soyinka for making the MInistry of Information and Culture his first port of call.