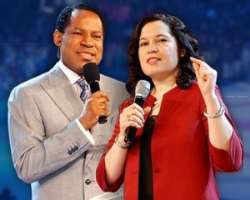 The cookie has finally crumbled for the marriage of Founder and co-founder  Christ Embassy Church  Chris  Oyakhilome and no former wife Anita.

A London court has granted them leave to go their separate ways, after a process that went on for about a year.

The court in High Holborn, London, granted Anita's divorce wishes based on the unreasonable behaviour and marital infidelity of her former husband, Chris.

According to an announcement by Anita's lawyers, Attwaters Jameson Hill Solicitors,  on their website the  marriage reached a cul de sac  on February 8 on orders of the court.

Anita filed the divorce on April 9, 2014 on the grounds of “adultery” and “unreasonable behaviours”. After months of keeping the matter out of public domain, news of the crack in their relationship came to public consciousness on August 29, 2014.The couple's marriage, two decades ago, produced two teenage daughters, Sharon and Charlyn.

Chris is one of the celebrity pastors, with large following especially among the youths. The crack and eventual dissolution of his marriage to Anita which was more or less like a poster marriage for their teeming following came as surprise to many admirers of the now separated couple.