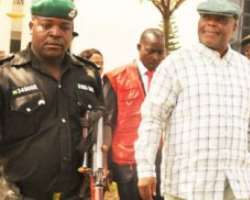 Dokpesi had earlier been arraigned along with his firm, Daar Investment and Holdings Limited before Justice Gabriel Kolawole of the same Federal High Court on December 9, 2015, in a six-count charge bothering on money laundering and procurement fraud related charges to which he pleaded not guilty.

They were alleged to have received public funds to the tune of N2.1 billion from the office of the National Security Adviser's (NSA) account with the Central Bank of Nigeria (CBN) between October 2014 and March 19, 2015, for the funding of media activities for the 2015 presidential campaign of the People's Democratic Party (PDP), an offence contrary to Section 58 (4)b and 58 (6) (7) of the Public Procurement Act, 2007.

At the resumption of trial before the new judge, the charges were read out to the defendant, to which a fresh plea was taken. Prosecuting counsel, Rotimi Jacobs, sought the court for an adjournment for commencement of trial, in which it will produce its prosecuting witnesses before the court.

Defence counsel, Wole Olanipekun, who led Kanu Agabi, Ifedayo Adedipe, Mike Ozekhome and Dayo Adelaja, all senior advocates of Nigeria (SAN), prayed the court to allow the defendant continue to enjoy the bail earlier granted him by Justice Kolawole, to which the prosecution did not object to.

The court adjourned the matter to March 2 and 3, 2016, for trial while he is to continue with the bail conditions earlier granted him.

He is currently enjoying a N200 million bail with two sureties in like sum.