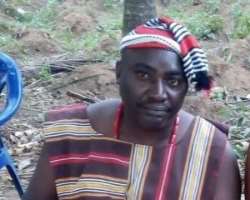 Actor Mike Odiachi died in the evening of Monday February 15, 2016 at the General Hospital, Ikorodu, Lagos state. Mike is best remembered in his role as Innocent Man in “IGODO” a pioneer adventure movie in the now world renown Nollywood.

The late actor is said to be  one of the best in delivering his roles which major has king or elder. He has featured in a sizable number of Nollywood movies with the prominent 'prophet of doom' and for his role in the acclaimed movie 'igodo' where he was buried alive.

He was  a member of the Anansa Playhouse in the 1980s. Odiachi also featured in movies like “Keboti,” “Prophet of Doom,” “Super Story,” “Scam Files” among others. He was once part of the stage interpretation of Ola Rotimi's “The Gods Are Not To Blame” as 'Odewale'.