Instead of democracy, Uganda moves toward dictatorship light 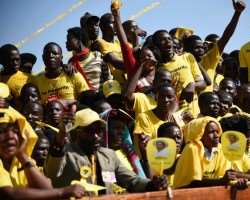 For eight hours, under a beating sun, thousands of people stood in an open field, waiting patiently.

Their flagging spirits were instantly revived when a column of huge, freshly washed Toyota Land Cruisers rolled up, the shiniest things for miles. Soldiers fanned out as Uganda's president, Yoweri Museveni, who has been in power for 30 years, poked his head out of a sunroof wearing his signature planter hat and waved to those gathered for a campaign rally.

The days of overt one-party states in Africa are over, analysts say, but the earlier pressure for genuine multiparty democracy seems to be fading.

Leaders across the continent who have been in office for many years feel the need to hold elections and even to go through the motions of campaigning, but the outcome is rarely in question. Many of Africa's recent elections were actually less fair than the ones of just a few years ago.

Look at Ethiopia, the Republic of Congo, Rwanda, Sudan and Zimbabwe, all places where the ruling party has been in power for decades. It is no longer fashionable for rulers to appear to be authoritarian, the argument goes, so government after government has undertaken the trouble and expense to legitimize its grip on power by organizing elections, or constitutional referendums, that few people inside or outside the country say are anything close to democratic.

Of course, this has happened in Egypt, Iraq and Russia, among other places. But in sub-Saharan Africa, the strongmen have a very specific need to appear democratically elected. This region is more dependent on foreign aid than any other, and Western donors like democracy, though there is a continuing debate about whether the donors care about it as much as they used to. Cooperation on counterterrorism and competition with China are other strategic issues the donors are now balancing.

Uganda is gearing up for elections on Thursday, and the country, a reliable Western ally and the recipient each year of $750 million in American aid, is much harder to read than the others. Analysts call Uganda “dictatorship light.” Mr. Museveni, a university-educated rebel who seized power in 1986, is still genuinely popular but at the same time repressive, acting as if his perch were shaky. Foreign journalists have recently been arrested. Opposition politicians are routinely harassed.

At the same time, Uganda feels much freer than, say, Ethiopia or Rwanda, two countries with impressive development whose opposition has been effectively neutralized. Ugandans love talking about politics, and many openly criticize their leader, which in Rwanda or Ethiopia would be a very dangerous no-no.

Mr. Museveni is known as a deft manager, and this campaign season one of his new tactics, a group the government calls the Crime Preventers, is a perfect example of how he constantly keeps people guessing. Are the Crime Preventers simply volunteer citizens organized by the government to battle petty crime and safeguard the exercise of democracy? Or is their true purpose to crush any election-related protests?

“This is what none of us can ever understand,” said one Western diplomat with years of Uganda experience, who spoke on the condition of anonymity. “Museveni steals when he doesn't need to.”

Uganda's economy has been steadily growing. Crime in the capital is relatively low. New schools, new roads, new malls and new bridges are popping up everywhere. Bulldozers are common sights, along with the ubiquitous Chinese foreman taking a drag on his cigarette, squinting under the sun at Ugandan laborers digging a ditch or performing some other rudimentary road-building task.

These are the everyday things Mr. Museveni highlighted at the recent campaign rally in Kalungu, a bushy hamlet near Lake Victoria.

“It's good that your district is small enough and you have a grader already,” Mr. Museveni told the crowd. “We shall add you another one from Japan. We shall also give you an excavator, a road compactor, a bowser and two tippers,” big trucks used to work on roads.

He paused to wipe the sweat from his face. Nearby vendors hustled posters of him with his face Photoshopped onto a muscle-bound body toting an enormous assault rifle, making the 71-year-old president look like Rambo. Many supporters said they credited Mr. Museveni with bringing peace, nothing to sneeze at in light of Uganda's violent history.

When Mr. Museveni went into the bush to start a rebellion in the early 1970s, Uganda was sinking into the blood-soaked thrall of Idi Amin, a buffoonish dictator accused of cannibalism. When asked about cannibalism after he fled into exile, Mr. Amin did not exactly deny it.

“I don't like human flesh,” he told an interviewer. “It's too salty for me.”

This election cycle, some detractors have tried to say that Mr. Museveni is even worse than Mr. Amin. The charge has not really stuck. The presidential challengers, most analysts say, are uninspiring and well-worn themselves. The leading opposition figure is a former army doctor, Kizza Besigye, who is now making his fourth bid for president and who was briefly arrested this week at a campaign event. Next comes Amama Mbabazi, a former prime minister who claims to be a new voice even though he was in the ruling party for years.

There are five other challengers; most Ugandans do not seem to know much about them.

Some analysts say the electorate is becoming lethargic, with opposition sympathizers tired of trying to defeat Mr. Museveni and concluding that elections here are mostly a sham, to bestow legitimacy. This fatigue seems to be what seeped into Ethiopia and Zimbabwe, where the most recent elections were less competitive than the ones that came before.

But others warn that Uganda may be approaching a tipping point, especially because Mr. Museveni seems to be making plans either to extend his reign beyond what is now legally possible or to hand power over to his son. One army general who complained about this was recently jailed. The Ugandan Constitution says candidates for president cannot be older than 75, meaning that this should be Mr. Museveni's final term — unless the Constitution is changed, and there is already talk of doing that.

Then there are the Crime Preventers, more than 100,000 citizens who have been deputized to control crowds, arrest suspects, guard ballot boxes and gather intelligence. Their political bent is no secret.

Zereth Adio, a Crime Preventers zone coordinator, said her group was preparing for trouble from “those opposition guys.”

“This is what I worry about,” said Professor Kabumba, who spoke from behind his desk in a dimly lit office in central Kampala. “Just beneath the facade of democracy is a real military government. The chance of a peaceful transition of power is slim to zero.”

But then he laughed.
“You see people walking around freely,” he said. “I can sit here and say these things. That's the genius of it all. It's like that movie — what's it called? — 'The Truman Show.' At what point will people know this is like a TV show, that it's all being managed?”

At the end of the campaign rally in Kalungu, Mr. Museveni's convoy left as quickly as it had materialized, zooming away in a cloud of noise and dust.

“I think the Old Man should be in power until he dies,” said Paul Ssebbowa, a farmer, as he began his long walk home.

His parting words: “There's no one else.”
(The New York Times)