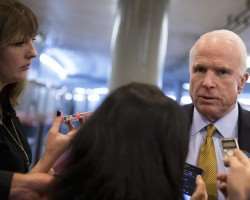 It's also wholly at odds with everything McCain has said and done throughout his career. TheHuffington Post reported yesterday:

The top Democrat vying to challenge John McCain for his Senate seat this fall is accusing the Arizona Republican of hypocrisy over the effort to replace – or rather not replace – the late Supreme Court Justice Antonin Scalia. […]

The campaign team for Rep. Ann Kirkpatrick (D-Ariz.), who's running to replace McCain, found the senator's switch so noteworthy that they went looking for those previous occasions when he explained why presidents deserve votes on nominees. And they found them.

Indeed, the Kirkpatrick campaign uncovered some real gems. In one particularly notable example, McCain sat down with MSNBC's Chris Matthews in July 2005, making the case that if Democrats want to choose Supreme Court nominees, then they should “win the next presidential election,” since “that's the way the system works.”

For the record, Democrats did, in fact, win the next presidential election.

The senator also noted at the time that he “voted for both Justice Breyer and Justice Ginsburg, because I believed that President Clinton won the election,” and “elections have consequences.”

McCain added, “The American voter was very well aware of what kind of judge the president of the United States was going to appoint and they decided to re-elect him. Maybe that wasn't the reason, but they knew that came with the deal.”

Right. And in 2012, Republicans spent a fair amount of time telling Americans that the future of the Supreme Court was on the line. To borrow a phrase, voters were very well aware of what kind of judge President Obama was going to appoint and they decided to re-elect him. Maybe that wasn't the reason, but they knew that came with the deal.

Perhaps McCain might make the case that 2016 is qualitatively different because it's a presidential election year, but let's not forget that McCain was in the Senate in 1988 when he voted along with 96 other senators to confirm Justice Anthony Kennedy.

As for the senator's explanation, his office issued a written statement blaming the “nuclear option” for destroying “any semblance of cooperation.” As a substantive matter, this can charitably be described as gibberish.

In case McCain's forgotten, the Senate Republican minority imposed a blockade in 2013 on any President Obama nominee for the D.C. Circuit, regardless of merit, filibustering literally every jurist considered for the appellate bench. Republicans said at the time that the partisan blockade would continue indefinitely, even on judges who enjoyed majority support in the Senate.

Left with no choice, Democrats restored majority rule using a legislative maneuver that Republicans came up with during the Bush/Cheney era. McCain and his cohorts now believe that change justifies a new tantrum and another blockade. There is simply no way to take such an argument seriously.