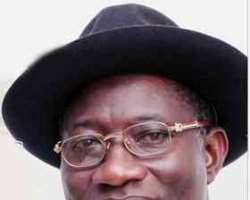 The fund would be dedicated towards addressing all forms of security challenges across the country.

The Acting President disclosed this to a delegation of the South-East Council of Traditional Rulers, during a courtesy visit to him in the Presidential Villa, Abuja.

'The Federal Government was aware of the security challenges facing the country and is determined to tackle it,' Jonathan informed the royal fathers.

Noting that investors would not be encouraged to invest in the country if security is not guaranteed, the Acting President said the security fund would 'be used to acquire superior weaponry as well as technology for improved intelligence.'

He also expressed concern over the erosion problem in the South-East, promising that the menace would be tackled with input from the Ecological Fund.

On the amnesty programme in the Niger- Delta, the Acting President restated government's resolve to guarantee its implementation.

Jonathan also assured the traditional rulers that the present administration is determined to conduct credible elections in 2011.

Earlier, the leader of the delegation, His Royal Highness, Eze Cletus Ilomuanya, said the South-East traditional rulers were impressed by the Acting President's performance in ensuring the stability of the country within the short period of his leadership.