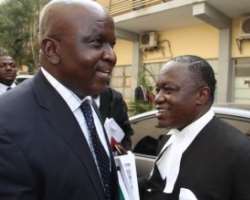 A Senior Advocate of Nigeria, Ricky Tarfa, has been arraigned before a Lagos High Court sitting in Igbosere by the Economic and Financial Crimes Commission for an alleged obstruction of justice and attempt to pervert the course of justice

Tarfa was arraigned on two counts before Justice Aishat Opesanwo of a Lagos State High Court in Igbosere.

EFCC, in charge No-LD/2417C/16  alleged that Tarfa on February 5, 2016 hid two suspects, Nazaire Sorou Gnanhoue and Modeste Finagnon, both Beninoise, in his Mercedes Benz Sports Utility car, thereby shielding them from being arrested and willfully obstructing the course of justice.

The suspects were said to have fraudulently converted some sophisticated manufacturing equipment, property of Rana Prestige Nigeria Limited for their own use. They are also being investigated for alleged tax evasion running into millions of naira. Tarfa allegedly  prevented two operatives of the EFCC, who wanted to arrest the suspects, from carrying out  their statutory duties.

Tarfa was accused of “keeping the said suspects in your car between 11.00 hours to 16.30 hours on or about the 5th day of February 2016 within the jurisdictional of this honourable court.”

In the second count, Tarfa was accused of making an attempt to pervert the course of justice “by communicating with Hon. Justice M.N. Yunusa of the Federal High Court through your mobile telephone No. 08034600000, whilst suit No. FHC/L/CS/715/2015 between Rana Prestige Industries Nigeria and the EFCC; and suit No. FHC/L/CS/715 between Hair Prestige Manufacturing Nigeria and the EFCC were pending before the said judge.”

According to the EFCC, Tarfa was the one who filed the two suits on behalf of his clients, who were “seeking to restrain the commission from performing its statutory duties.”

The EFCC claimed that by allegedly communicating with Justice Yunusa in the circumstances, Tarfa had violated Section 97(3) of the Criminal Law of Lagos State No.11, 2011.”

But when the charges were read to him, Tarfa, who stepped into the dock at about 11.20am on Tuesday, pleaded not guilty.

Tarfa's counsel, Niyi Akintola (SAN),  led 14 other Senior Advocates and about 150 other lawyers.

Akintola, in his application for bail of his clientmade on the strength of  Section 115 of the Administration of Criminal Justice Law,  urged the court to grant the defendant bail on self-recognition.

Akintola informed the court that the defendant was granted administrative bail by the EFCC and he regularly  reported to the office of EFCC every morning by 8 am. He added that the defendant had made himself available for trial. He said Tarfa was prepared to defend the charge filed against him by the Commission. He assured the court that as a Senior Advocate of Nigeria,  Tarfa would not jump bail.

The EFCC's counsel,   Rotimi Oyedepo, opposed the bail application, saying that defendant being a SAN is inconsequential considering the nature of the case.

Oyedepo prayed the court to dismiss the application for bail and remand the defendant in prison custody. He also urged the court  to disregard the submissions of the defence lawyer that Tarfa was granted bail on self recognition, saying that the administrative bail followed   an undertaking by the President of the Nigerian Bar Association (NBA).

Justice Opesanwo, however,granted Tarfa bail on self recognition with a clause that he must not travel out without the court's permission

The judge said she was satisfied that Tarfa would not abscond if granted bail.

She, however, expressed concern over the huge number of SANs and other lawyers who besieged her court to defend Tarfa.

“I find no need for this magnitude of support. It is to harass and intimidate us on this side,” she said.