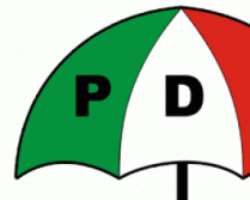 A twist emerged late Tuesday as the Board of Trustees (BoT) of the Peoples Democratic Party (PDP) rejected the choice of a former governor of Borno state, Ali Modu Sheriff as the next national chairman of the party.

Speaking to newsmen shortly after a meeting of the BoT, former Minister of Transport, Chief Ebenezer Babatope urged Nigerians to disregard the report of Ali Modu's endorsement by the party hierarchy saying that the BoT unanimously agreed that Ali Modu Sheriff is not qualified to lead the PDP as its chairman.

“As we speak, Ali Modu Sheriff is still waiting for the ratification of the NEC of the party. But the Board of Trustees unanimously rejected him as the party's choice” he said.